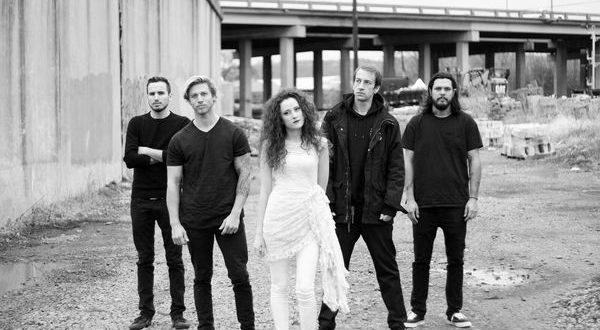 Tragic Hero Records is proud to welcome The Artificials to their roster. The band is former ERRA guitarist Alan Rigdon‘s new project which features his wife, Sarah, on vocals. Rigdon is excited to be a part of the Tragic Hero family once again, stating: “The Artificials are definitely going to bring some variety to Tragic Hero. Being a fresh take on female fronted metal is scary but the risk is in the risk not taken. You won’t hear another band quite like us that’s for sure. We are thankful to be on the Tragic Hero roster!”

In addition to the signing announcement, the band premiered their first single “In The Hollow” which features original ERRA vocalist Garrison Lee. This is Lee’s first musical project/appearance in two years. Rigdon talks about working with his former bandmate, “We wanted to feature Garrison on the single because he has a cult following for his distinct vocals. I’ve kept in contact with him since I left ERRA and we always threw around the idea of featuring him on an Artificials song.” Rigdon shared what Lee said to him about the song, “He told me, ‘I’ve turned down guest vocals for every band that has asked me to feature on their music because I don’t want my first feature since I’ve been out of the game to be bad but when you asked, I knew it would be sick and I was more than happy to do it.”

he single is off the upcoming album Heart and  Rigdon describes it as one of the most personal songs on the record with a very important message, “The meaning behind ‘In the Hollow’ is not giving in to the “American Dream” by settling and living paycheck to paycheck. Life is meant to pursue your passions regardless of circumstance. Our faith and passions drive us to see past the mirage of the norm, keeping us from being hollow.”

News regarding the release of the band’s debut full length Heart is expected soon. For now “In The Hollow” is available on all major and minor DSPs (Spotify, Apple Music, iTunes, Google Play, etc.) and any other streaming medium.

About The Artificials
With a unique use of polyrhythms and odd time signatures, The Artificials will take you on somewhat of a mathematical journey of controlled chaos. Every song has a purpose and a certain feel, while keeping it simple with a catchy chorus to keep people singing. The dynamics of the clean guitar sections will take you from a sparkling angelic coma to a crushing chaotic rhythm and rip you back into reality.

The Artificials originally consisted of Guitarist Alan Rigdon and his friend Aaron Surratt way back as teenagers posting demos on Myspace. Although the recordings were rough, it got the musicians noticed. Rigdon decided to put the band on hold when he joined ERRA. After recording with ERRA and going out on numerous national tours, Rigdon felt it was time to get back to his own thing. He went on to marry Vocalist Sarah Rigdon and started up The Artificals again.

Finding the perfect additions to the line-up proved to be easier said than done. Rigdon found Travis Wilburn (guitar) on social media and because he had a similar writing style, he proved to be a perfect fit. Brent Stanley, a proficient multi instrumentalist was a hometown friend of Rigdon’s and was brought in on bass. Finding a drummer was the most difficult spot to fill but luckily Rigdon’s childhood friend, Shelton Summersgill was between projects and joined on drums.

The Artificials released a 4 track EP in 2014 (Produced/Engineered by A. Rigdon of Sturdy Sounds Recordings, Mastered by Griffin Kolinski [RIP] at Hourglass Studios). It was these recordings and the past relationship Rigdon had with Tragic Hero Records President Tommy LaCombe while with ERRA that led to the band partnering up with the label for their first full length album, “Heart” (Mixed/produced/mastered by A. Rigdon of Sturdy Sound Recordings). Rigdon explains, “I have history with Tragic as I used to play guitar for ERRA. Tommy and I kept in touch because I felt like he really cared about our music and provided us with such a personable business relationship.”

Heart will be out March 2017. The band looks forward to hitting the road on their first tour together.