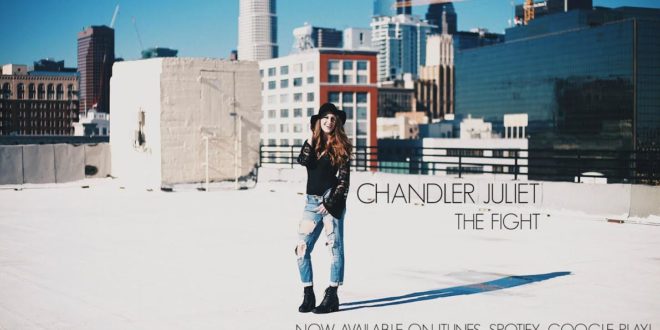 Pop rock singer-songwriter Chandler Juliet has maintained a steady output, kicking off the first half of the New Year with “The Fight”. The single made its debut to online music outlets last Thursday, and features production by Revolver Recordings personnel including Dean Dinning, Jacob Williams, and Mikal Blue. During the verses, Juliet’s vocals bounce with competent fluency while bolstered by hooky digi-drums. The song’s foundation is predominately of the punchy acoustic variety, and the chorus brings that potential to the forefront. By this point, Juliet sounds especially well-blended in the mix of guitars—shimmering, jangly, and all the more breathable. When put in the context of the lyric video (created by Rise Revive), it’s as if Juliet is looking back on her formative grounds, embracing the dizzying, frightful, and joyful aspects of her musical journey thus far. The retrospective-esque color palette gives way to that notion, carrying a subdued lyric font that equally represents the song and video as a whole.

I come from a family who is passionate about all things music. I learned to sing at an early age, and by 13, had my very own Fender Strat guitar. I tried my hardest at learning all that I could. Because I was born with cerebral palsy, I had to teach myself an adaptive playing style. I learned to write and record my own music, despite these difficulties. In college, I started making great use of my writing abilities by reviewing music, as well as copy editing. I guess it's best to stick with what you know, while welcoming a fair challenge at the same time.
Previous Gallery: Black Map at The Fillmore in San Francisco, CA 01.13.17
Next Gallery: Lukas Graham at The Pageant in St. Louis, MO on 1.16.17