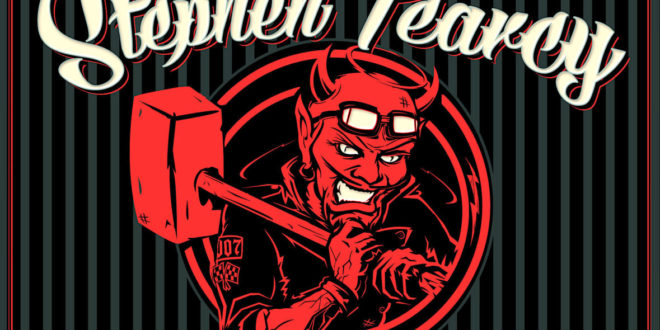 It’s been awhile since Stephen Pearcy has released a record to eager listeners. Pearcy is known mostly for being the frontman of the 1980s hair metal act RATT, though he has released a string of solo projects dating back to 2002. Alongside the likes of Poison, Quiet Riot, and Skid Row, RATT were one of the most prominent hair metal acts throughout the 1980s. For his fourth record, Smash, Pearcy seems content on experimenting with his sound while still remaining true to his metal roots.

The album begins with “I Know I’m Crazy,” which features and interesting organ intro and then immediately develops into a spacey hook that was fairly unexpected. When the vocals soon kick in, it’s apparent that Pearcy still carries good singing chops with him. The song takes a slower approach compared to what fans would likely be accustomed to, especially those mainly familiar with RATT, though it does a fine job of taking its time. Pearcy doesn’t have too many moments to showcase his range as a singer, but it’s evident that his voice has held up over the years. After listeners have experienced Pearcy himself, the track then unleashes a solid solo from lead guitarist Erik Ferentinos who proves that he can provide a dose of 80s energy that works alongside Pearcy’s strengths. The second track, “Ten Miles Wide,” features more guitar work that is heavily reminiscent of the 80s glam metal scene. Pearcy performs even better here and his higher pitched vocals sound nice when paired with the almost sugary instrumentals. A track like this combines hair metal with an arena anthem aesthetic and the result is a solid piece of catchy hard rock.

The 80s nostalgia is fairly rampant throughout this entire album. The track “Rain” is a gleeful pick-me-up song that features a chanting chorus in between its uplifting lyrics. Between the lyrics and the incorporation of piano throughout its runtime, this track has a hefty helping of cheese, but that isn’t to say it’s not enjoyable. One honestly can’t help but smile at the glossy coating that this track wears. This track and the closer “Summers End,” are nice throwbacks to the soulful ballads that were prominent several decades ago. Track 10, “Jamie,” might be a bit repetitive but Pearcy’s energetic performance paired with the airy backing vocals and another impressive solo from Ferentinos makes this another fun throwback moment.

The main setback of Smash is mainly its length. Pearcy’s style works best in a short and sweet texture, so the fact that there are thirteen tracks overall makes the album feel slightly bloated. While the album offers bursts of fun, certain moments seem to drag it down. Tracks like “Hit Me With a Bullet,” “What Do Ya Think,” and “Passion Infinity” don’t quite pack the same punch as some of the previously mentioned songs. These songs feel cliched more than anything and come off as filler tracks compared to the rest of the album. If the album were trimmed down to the solid nine or ten tracks that make up the majority of the project, then the listening experience would likely be even more enjoyable despite its shorter time frame.

Even though it can be weighed down by certain tracks, Smash is mostly a fun listen. Pearcy is still able to deliver with his accustomed vocals and he sounds like he’s enjoying himself throughout this project. Pearcy is certainly putting his full effort into this album and that’s what makes Smash an impressive addition to his discography. For listeners who want a nice kick of glam metal then this album comes with a high recommendation. Fans of RATT will definitely not be disappointed because Pearcy more than carries his own throughout this album and offers an impressive piece of nostalgic hard rock.

Cain Miller is an aspiring writer who hopes to work his way up and gain notoriety for his material. Having written about film, television, music, and sports, Cain is always looking to gain as much experience as he can and continue to improve his writing abilities.
@cainemiller
Previous Interview: Stephen Pearcy on new album ‘Smash’ and Ratt reunion
Next Album Review. Crooked Lines: Rebekah Todd