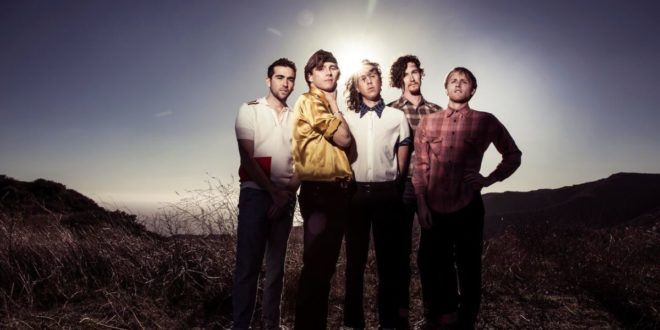 We’re just two weeks into 2017 and LA-based rock band IRONTOM have already landed an arena tour, put the finishing touches on their full-length debut and released a new song with companion video to match. The big news hit late last week, when multi-Grammy winners the Red Hot Chili Peppers announced that they’re taking IRONTOM on the road for a string of arena dates that begin on May 11th at the Paints Arena in Pittsburgh and run through May 29th at the Scotiabank Saddledome in Calgary (see itinerary below). It’s an understatement to call it exciting news for the band, who cite the Chili Peppers as one of their musical influences.

“It’s difficult to measure just how much of an impact and influence they’ve had on us as a group,” says IRONTOM vocalist Harry Hayes. “It’s an unbelievable honor and we’re so excited to get to open for them – they’re truly a great rock and roll band.”

The band is currently wrapping production on their full-length debut, which was produced by AWOLNATION’s Aaron Bruno and is due for release later this year. They’re giving fans a sneak preview of the album with the release of first track “Hookers,” which can be heard (along with another new song, “Be Bold Like Elijah”) HERE and a video that can be seen below:

“We’re thrilled with how the album turned out,” says guitarist Zach Irons. “The songs all came together to create a cool little world and we’re excited for people to jump in and swim around.”

All meaty, beaty, big and bouncy, IRONTOM (rounded out by bassist Dane Sandborg, keyboardist Daniel Saslow and drummer Dylan Williams) set themselves apart from the pack by bringing pop clarity to a blend of ‘70s-inspired rock and twisted electronics. They introduced themselves with a pair of EPs – 2012’s The Loose and 2013’s The Nitro –the latter produced by Alain Johannes (Queens of the Stone Age, Eagles of Death Metal, PJ Harvey, Eleven). Buzzbands called them a breath of fresh air and said their sound is for those that “want to imagine what Zep would sound like as a really good ‘90s indie-rock band.” For their full-length debut, Aaron Bruno aimed to capture the raw vitality of IRONTOM’s live show. “The first time I saw the band play was in one of their parents’ living room, and right there I knew they had a deep and infectious musical fire in their bellies that together we could unleash on the world,” he says.

RONTOM, who’ve spent the past year touring the US with AWOLNATION, Finish Ticket and Run River North, have a live show that centers on the endlessly riveting interplay between Hayes’s outrageous showmanship and the band’s fierce intensity. And both onstage and on record, the band gives off an infectious energy that comes from a brotherhood-like connection. “Even if something’s off and one of us is going through a bad time, when we’re all together it becomes this powerful thing that’s so much bigger than the sum of its parts,” says Hayes. “If people are getting even 10 percent of the joy that we feel from playing together, then they’re definitely getting a whole lot.”