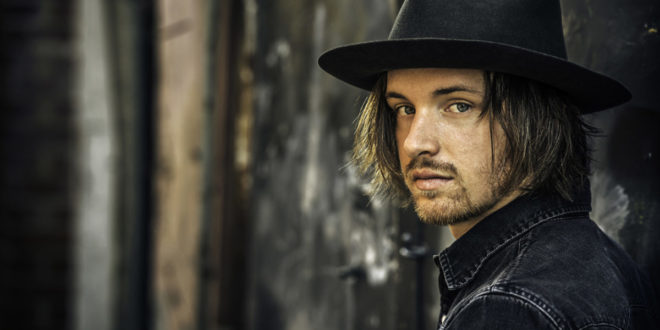 A chance exposure to the sounds of John Prine led singer-songwriter David Luning to reconsider his life priorities. Once a film score student at Berklee College of Music, Luning was enlightened by this revelation to leave school and pursue a full-time career as a musician. On the surface, such a decision comes off as impulsive, perhaps half-cocked to an extent. However, one listen to his craft warrants the understanding of not only a concise product, but an authentic talent.

I had the pleasure of catching up with David to further discuss his story, as well as the creative process behind his latest album, Restless. The rock n’ roll-tinged Americana debut, slated for a February 3rd release, covers poignant instances of loss and disarray, but bravery and growth all the same. In David’s case, it’s interesting to imagine the outcome had the influence of John Prine not reached him when it did. Nonetheless, David’s pursuit and drive continue to push him forward.

ME: I’d like to start off with your initial period as a songwriter. What types of influences were you implementing at the time while finding your sound?

David: I’ve been inspired by so many different things. Whatever moves me. That’s why I was initially pursuing film scoring. But it’s funny because as much as I was drawn to more tragic music, because it more readily moved me, I wasn’t a super serious guy. And I think that after hearing the music of John Prine, and hearing such heartfelt, moving, yet honest and playful lyrics, it just clicked for me. I wanted to do that.

ME: Did it take a while before you’d formed a solid musical identity?

David: When I came back to California I only had one song that I had written in the americana vein. I wrote a lot when I came back. Initially, I pretty much only wrote sad songs. But then I found out that most people who go to see a concert, typically don’t like to be bummed out the entire time. So I started writing more upbeat songs. Then as time progressed, and I had been touring for a while with my band, I started to incorporate more rock into the mix. So yeah, I’d say it took a bit, but the truth is, for me it is always evolving.

ME: While at Berklee College of Music, how effectively did your natural musical proclivities transition into your studies of film scoring?

David: Most of my writing, up to the point of going to Berklee, had been more dramatic, cinematic piano compositions. Therefore it just made total sense that the path for me in college was to study film scoring.

ME: Your scope of inspiration peaked the moment a friend turned you onto John Prine’s music. What was it about his song “Souvenirs” that resonated with you, to the extent of reevaluating your career ambitions?

David: Everyone can relate to having moments, or things, or “souvenirs”, in their life that have priceless meaning to them and the loss of them or revisiting them can bring up a lot of emotions. I was most impressed by how the song moved me and how the lyrics seemed to be straight forward but held many layers of other stories that the listener can easily conjure. It was that combination of seemingly straight forward lyrics with the depth of other stories woven underneath that really inspired me and motivated me to pursue that kind of songwriting.

ME: By learning more about Prine, did you feel that his stylistic and thematic qualities were especially on your level?

David: I really liked the way Prine seemed to view the world through his songs. He often wrote about serious things, but also wrote about the silliness of this big ol’ goofy world. It’s funny because, while this new album is a little on the darker side, people that know me well, know that i can be a pretty ridiculous person. It’s been known to happen that I will get goofy to the point where people will think I’m wasted when I’m dead sober (laughs)!

ME: Upon realizing your new path, you dropped out of college almost immediately. But your returning back home to California meant that a resource was effectively in place. Is it safe to say that the decision wasn’t entirely on a whim?

David: Yeah, it was a process. My parents weren’t too keen on the idea of dropping out of college. But over one winter break I played them a song I had written while in Boston, and they could see that I was very serious and really motivated to do this, and they finally gave in. And so I moved back to California and been here ever since.

ME: In doing so, had your aim for self-sufficiency become an especial priority?

David: It took some time to get stable as an artist and to earn a living, but my amazing parents supported me in those earlier stages until I was able to make a living.

ME: Let’s talk about your new album, “Restless.” Was the album wholly constructed out of this newfound inspiration from Prine, or did that inspiration suddenly expedite the writing process?

David: Prine was definitely the one that started it all for me. Writing this record however, I actually had a ton of influences. These songs were all inspired by different things; different significant moments in my life.

David: Karl Derfler sure is a beast when it comes to production and engineering. I was incredibly honored to work with him on this record. He is super quick and astute and is able to take songs to their full potential. We worked together to pick the songs that were on this record, however, he was able to hear the potential in songs that I hadn’t completed yet that he said needed to be on the record. “Be Like Gold”, “Royalty”, “Different Piano Song”, and “Brother in Chains”, were all incomplete songs that I just recorded on my iPhone and sent to him. He told me I needed to finish those songs because he thought they should go on the album. So I did, and I’m really glad I did.

ME: I particularly found the songs “Danger” and “Ain’t Life A Beautiful Thing” representative of your career progression, in the sense that you’re first distancing yourself from what’s holding you back, and then immersing yourself in subsequent freedom. Would you say that these songs are part of a broader concept involving self-trust?

David: The songs I wrote for this record are all drawn from personal experience and significant moments in my life and therefore, “Danger” in particular taps on the issue of rebellion against a weakness and something that was holding me back. I think that one of the main themes of this record is traveling and moving forward, and the trials, tribulations, and joy that arise from that.

ME: Another theme I noted on this album is emotional maturation. The lead single, “Gonna Forget About You,“ as well as “Be Like Gold,” both center on striving to move forward by the most sensible means. In what ways do you feel writing and recording this album has contributed to both your musical and personal growth?

David: I’m not sure if the growth in writing and recording this record was personal. However, I do admit that songwriting can be pretty therapeutic. I think that working with Karl Derfler in the studio definitely contributed to a musical growth though. He is an inspiring producer and seriously knows his stuff. It was definitely a great musical learning experience to work with him.

ME: Bringing it back, had your friends not introduced you John Prine, would your career pursuit have gone similarly?

David: Man, tough to say. At the time I was pursuing a career in film scoring and I think I would have stayed with it. In addition, at the time I was listening to music like Mr. Bungle, Pixies, Radiohead, Queens of the stone age, etc. Had I not been introduced to John Prine and other americana greats, I probably would be doing film scoring and being in a experimental band like that.

David: I truly hope that people will enjoy this album “Restless” as much as I enjoyed making it!

Check out the video for the single “Gonna Forget About You”:

I come from a family who is passionate about all things music. I learned to sing at an early age, and by 13, had my very own Fender Strat guitar. I tried my hardest at learning all that I could. Because I was born with cerebral palsy, I had to teach myself an adaptive playing style. I learned to write and record my own music, despite these difficulties. In college, I started making great use of my writing abilities by reviewing music, as well as copy editing. I guess it's best to stick with what you know, while welcoming a fair challenge at the same time.
Previous Album Review. Dot Hacker: N 3
Next Interview: Karabas Barabas and the ‘Return of the Sexy Demon’