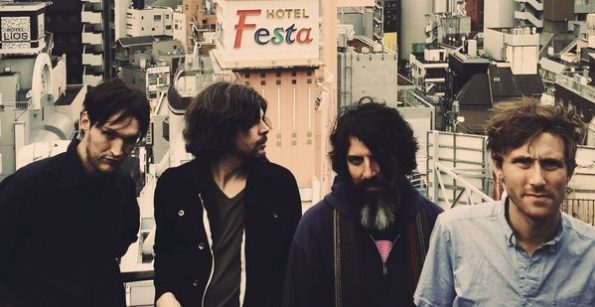 Dot Hacker’s nine track album N 3 will be released near the end of the month, January 20th to be exact. The band, led by frontman Josh Klinghoffer, serves up a cohesive buffet of songs that bleed into one another with ease. And while that quality sometimes detracts from the LP, hard to discern where one tune ends and another begins, Dot Hacker certainly know where their comfort zone is and they are sticking inside it in the best way possible.

The record opens up strong with the leading single “C Section.” It’s over six minutes long, a trend that the band will continue on the rest of the album- long songs/more content – , but in the case of this particular track it doesn’t drag at all, in fact it is very well paced. It has a jam band feel to it, as if the musicians are just sitting around playing and vibing off each other. The midtempo song is smooth and has a groove to it while also feeling a bit edgy, thanks to Klinghoffer’s growl of a voice that cuts through the instrumentation. The interesting thing about not just “C Section” but the album as a whole is that one can never quite grip what the actual lyrics to the songs are. But it doesn’t matter, because Dot Hacker know how to create a mood. There’s no real song structure here, no verse and chorus set up, which makes the whole thing a bit experimental and it works as an ambient dream of a song.

Next up is “We’re Going Where,” which again is quite a lengthy tune but spends each second pulling the listener in. There’s a Muse or Smashing Pumpkins – like feel here and it is a welcome slight change to the previous track. Klinghoffer’s vocals are sharper, never letting his audience go from note one. It’s captivating, like the most mesmerizing, hypnotic spell is being cast that is not only engaging but quite enjoyable. What the track is actually about remains a mystery but it doesn’t take away from the magic that Dot Hacker weaves. That in itself makes them not just musicians but magicians, taking mood music to a whole new level. One can sense and hear the passion in Klinghoffer’s voice and that level of commitment translates into a work of art the band should be very proud of.

The closing track “Minds Dying” is the most distinct song on the album, bucking previous trends Dot Hacker has followed on the rest of the LP. The starting background vocals are downright haunting along with the twanging instrumentation. Klinghoffer is a bit easier to understand here, and he gives a commanding vocal performance that in working all together helps make the song a dark triumph. At under four minutes Dot Hacker proves that they can produce a song in a shorter amount of time that still packs the same kind of punch their longer endeavors have. This song is much like a spider weaving one into its web, tantalizing, layered and dynamic and just very well may be the star track of N 3. It has enough of the similarities of the bands previous songs to fit together perfectly on the album but also shows Dot Hacker stretching their musical boundaries a little more and the result is addicting and memorable.

Elsewhere on the album “Beseech” doesn’t quite have that grab you from note one quality that Dot Hacker is so good at producing. It’s more a jumble of sounds than music and feels off, while “Apt Mess” is just plain forgettable and gets lost in a sea of far superior songs. And even though “Cassandra” is only four minutes long it drags.

Still N3 is a wonderful collection of songs, an album to zone out to, relax to and feel. Don’t forget to pick up your copy when January 20th rolls around.