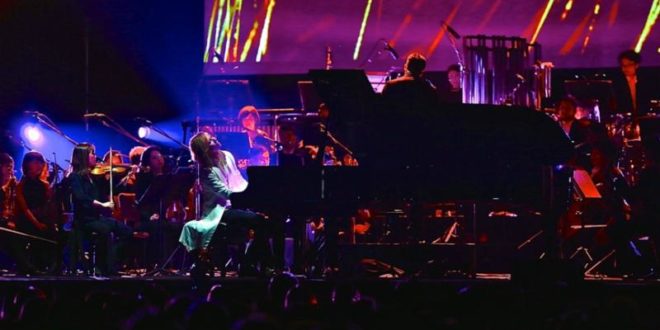 YOSHIKI–songwriter, drummer/percussionist, classically-trained pianist and the creative force of the rock group X JAPAN–will be performing LIVE from Paste magazine studios in New York today, Tuesday, January 10 at 1:30 p.m. PT/4:30 p.m. ET. The performance will be airing via Facebook Live (here) and will be available to view on the Paste magazine website later this week (here).

X JAPAN is the most successful rock band in Japanese history. The band has sold more than 30 million albums; singles and videos combined, sold out Japan’s 55,000-seat Tokyo Dome 18 times, and have played to tens of thousands of fans outside of Japan. X JAPAN became a cultural phenomenon and was the first Japanese band to achieve mainstream success while signed to an independent label. In 2014, X JAPAN headlined a colossal show at New York’s Madison Square Garden. In fall 2016, ‘WE ARE X,’ the critically acclaimed music documentary about X JAPAN was released to theaters after winning multiple awards. “LA VENUS,” the original song YOSHIKI wrote for the film is currently in contention for a nomination for this year’s “Best Original Song” at the 89th Academy Awards®.“LA VENUS” the single will be released via Sony Legacy Recordings and available everywhere in Spring 2017. The current line-up of X JAPAN is Yoshiki/drums, piano; Toshi/vocals; Pata/guitar; Heath/bass; and Sugizo/guitar, violin. X JAPAN recently announced the release of the band’s first new studio album in 20 years, which will also be available worldwide in 2017.