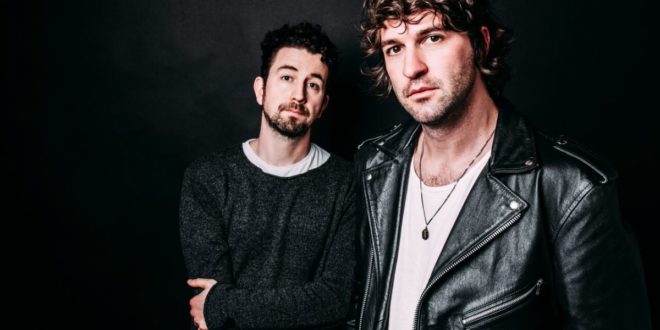 After three years out of the spotlight, Japandroids announced their new album last week. Near To The Wild Heart Of Life is due out January 27, 2017 on Anti- Records, with a special early release for vinyl on January 24th. Additionally, they released the first single of the same name, prompting Pitchfork to say “…a new Japandroids record feels like hero’s return,” and Noisey concurred, “thank the good lord for Japandroids.” A pre-order for the album is up now at www.japandroids.com, with the option to buy the special 7” edition of the single featuring a b-side cover of Talking Heads’ “Love → Building on Fire.”

Today, the band announces their first world tour in three years. Starting in Madison, WI on February 13th at the Majestic Theatre, taking them to their biggest show in NYC to date at Terminal 5 on February 23rd and a night at LA’s Henry Fonda on March 10th, finally winding up in their hometown of Vancouver on March 20th at the Commodore.  A European tour will follow in April. See all dates below. Tickets will be on sale this Friday, November 11th at 10am local time.

Near To The Wild Heart Of Life, was written clandestinely throughout 2014 and 2015 in Vancouver, Toronto, New Orleans, and Mexico City. It was (mostly) recorded by Jesse Gander (who had previously recorded both Post-Nothingand Celebration Rock) at Rain City Recorders in Vancouver, BC (September-November, 2015). One song, True Love And A Free Life Of Free Will, was recorded by Damian Taylor during an exploratory recording session at Golden Ratio in Montreal, QC (February, 2015). The album was mixed by Peter Katis at Tarquin Studios in Bridgeport, CT (May, 2016) and mastered by Greg Calbi at Sterling Sound in New York, NY (July, 2016).

Like Post-Nothing and Celebration Rock, the album is 8 songs. This is because 8 songs is the standard template for a great rock n roll album: Raw Power by The Stooges, Born To Run by Bruce Springsteen, Marquee Moon by Television,IV by Led Zeppelin, Horses by Patti Smith, Paranoid by Black Sabbath, Remain In Light by Talking Heads, Master Of Puppets by Metallica, etc.

Like Post-Nothing and Celebration Rock, the album was sequenced specifically for the LP. On Near To The Wild Heart Of Life, side A (songs 1-4) and side B (songs 5-7) each follow their own loose narrative. Taken together as one, they form an even looser narrative, with the final song on side B (song 8) acting as an epilogue.