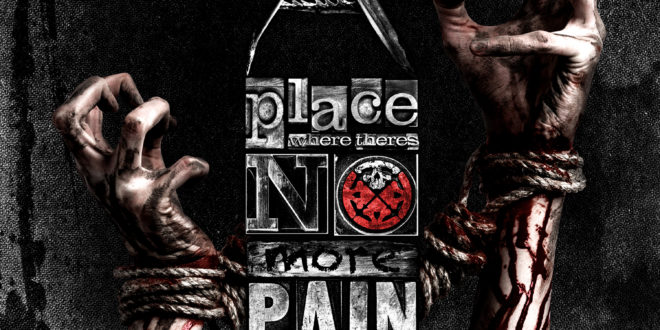 Reactivated Brooklyn hard rock legends LIFE OF AGONY are hard at work on their new album and Napalm Records debut A Place Where There’s No More Pain.  Today the band has confirmed an April 28th release date and have debuted the album’s artwork.  The track listing along with pre-order options will be made available soon.

“We’re in the final stages of mixing the album with our producer and then we head into mastering sessions with Ted Jensen (Alice in Chains, Machine Head, Deftones) at Sterling Sound, NYC. This record is a monster and we’re so psyched to finally share it come April. It’s got such an energy to it. Raging guitar riffs, heartfelt lyrics and killer grooves. We definitely turned things up a few notches in 2017 and it feels great. And I gotta say, we’ve never been so focused as a band. Before we even wrote the first note, we all knew what kind of record we wanted to make. You can hear that drive and intensity in the tracks and you can feel the momentum building.” -Alan Robert, Life of Agony

In support of A Place Where There’s No More Pain, LIFE OF AGONY will hit the road this Spring in the Northeast United States.  The first short run of dates kicks off April 27th in Allston, MA and runs through April 29th in Poughkeepsie, NY.

The second jaunt begins May 12th in Stroudsburg, PA and runs through May 20th in Sayreville, NJ.  Additional dates will be announced in the coming weeks.

With the excitement around LIFE OF AGONY at a fever pitch, the band has announced a contest called the LIFE OF AGONY “Calling From the Underground” Unsigned Band Contest.  This contest will award the best unsigned band in the tri-state area by being booked to open on one of their upcoming dates.  LOA got their big break in the early 90’s as an unsigned act, opening for Overkill, Type O Negative, and Biohazard at The Ritz and now want to be able to give that chance to an up and coming band.  The winner will be opening the band’s hometown album release show April 28th in New York, NY More details will be announced soon.

LIFE OF AGONY returned to the stage and performed on multiple festival dates in Europe over the summer of 2014. They have toured extensively across the globe since!  The famed River Runs Red line-up, of vocalist Mina Caputo, guitarist Joey Z, bassist Alan Robertand drummer Sal Abruscato are re-invigorated and ready to make 2017 the year of LIFE OF AGONY, and A Place Where There’s No More Pain.