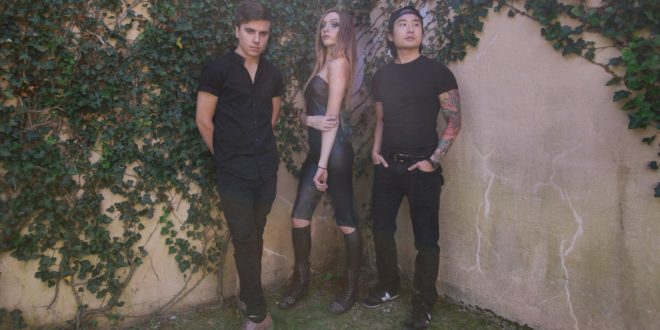 Amidst a successful promotional campaign following their debut EP, Versus, New York/New Jersey-based VISTA shine on strong. The trio’s blend of crunchy pop hooks and uplifting choruses has already resonated with such outlets as RockSound, Myspace and Buzznet. Much had been learned during this phase, the loss of a single band member causing disarray, but ultimate recovery nonetheless. “A lot of things just changed,” says singer-guitarist Hope Vista. “The dynamic wasn’t the same and it was early enough to start over”. With a gleam of positivity, she added, “We’re just trying to move forward and not focus too much on how there was a lineup change! This is VISTA!” Provided Hope’s transition from decade-long solo tenure to brand new band, such change could only be taken in stride. “It led me to two amazing band mates and friends…and new Chipotle partners,” she laughs.

Indeed, the revamped lineup, featuring second guitarist Greg Almeida and drummer Matt Vlossak, is grateful to continue a fresh path. “Henchmen,” their follow-up single, will be released on the 13th of this month to put the New Year in full swing. Throughout our conversation, VISTA expound on their journey emphasize the essentials of communication, appreciation of band dynamics, and most importantly, friendship.

ME: In what ways has your chemistry between each other solidified thus far?

Greg: I think that we are all seasoned in terms of being in a band and working with people musically. We all know what our goals are and what type of people we want to work with. And we communicate (laughs)! That is key. It all feels very certain and driven now, which is good!

Matt: We always express how we feel. We’ve all learned communication is vital for a band to survive.

ME: Are there certain qualities you can appreciate about each other in terms of what you can contribute, not only sound-wise, but in your live performances?

Greg: I, for one, love Hope and Matt’s stage presence. They both go hard! And I like to as well. I love Hope’s voice too; it has a lot of possibilities. And Matt is a great hard hitting drummer.

Matt: I always say if you leave the stage completely breathless—like you felt you ran a marathon—then you know you put on a show and at your best. What I enjoy is seeing everyone’s passion shine through their stage presence. Both Hope and Greg don’t just stand there like I’ve seen members in other bands do. They feel the music. It shows when you see us live.

Hope: Thank you, friends! I think our dynamic onstage is super special, very natural and just a huge ball of energy. Matt and Greg round everything out. Greg is one of the most intricate, hard-working musicians I know, and Matt is super dedicated to his craft and consistently wants to be better. I love all those qualities; they show commitment.

ME: You made effective use of those qualities in your most recent performance, which was Webster Hall in New York City. How quickly were you affected by the vibe of this audience?

Greg: They were all pretty into it, so that just made things easier, honestly. Even though a few of us were sick (laughs)!

Hope: That show was tight! We’d just come straight from recording “Henchmen,” so both Greg and I had no voices and were just feeling worn out and under the weather. It was interesting to see how we could collectively pull together to still try and put on the best show we could, I think it went well! The audience was super fun. I love a strong, interactive audience, that’s a vocalist’s dream. Nobody was afraid to jump, clap, or scream. It was awesome.

Matt: I LOVED Webster Hall’s energy. I love NYC in general. Something about it. Maybe it’s the smell of the pizza. That gets people excited (laughs)!

Hope: Energy is the greatest thing to feel onstage.

ME: Overall, did you feel that audience gleaned sufficient understanding of how you function as a unit?

Greg: Yeah, and I think we are understanding ourselves as well. We all learn a little more about each other every day! So, it’s nice to go up there and be ourselves.

ME: When it comes to recording, how do your individual experiences from live performance translate in a studio setting?

Greg: Well they’re two completely different things, but over the years I’ve begun to understand them better. Studio stuff you just have to pay attention to your musicianship more. You still have to do that live, but sometimes being in the studio requires more dynamics. It depends.
Matt: Agreed. I grew up believing if I can’t play it live, then I’m not putting it on the record. I try to be 100% true to what I’ll play in a live setting. Edit: More cowbell please.

ME: Tell me a bit about the transition into your follow-up single, Henchmen. Had it just been these recent career happenings alone that jump-started the writing process?

Hope: It was just a voice memo idea I had. We had ended a practice and I just said, “Hey, I have this idea.” You could kind of see a little spark go off above Greg’s head when he heard it; he wanted to go home and see what he could do with it. And it just built from there! We all wanted to see how we worked together in a studio setting, all three of us felt equally inspired, and the track just came out naturally!

Greg: I’d say so. When we all formed, and started jamming the old stuff, we were stoked to start writing new material. It came naturally from there. Hope and Matt and I had some sessions then bam, son—Henchmen.

Matt: We were all anxious to start writing new material! It all came naturally pretty fast.

ME: The song had all three of you collectively contributing to it. Do you feel it best represents where you are as a band, especially in refining your anthem rock sound?

Greg: Yeah! it represents a side we aren’t afraid to go to. The catastrophic sound of “Henchmen” is super cool to us, but there’s other avenues of anthem rock we are yet to explore. Like, every band has their slower song, fast song, total-jam song, etc.

Matt: There’re definite doors we haven’t explored yet. I have a few ideas in my head that I want to try as the others have their own ideas, I’m sure. “Henchmen” is a nice stepping stone in the right direction. But there’s so much more to explore!

Hope: The anthem rock thing is kind of just centralized around exploring the different sides of what the word ‘anthem’ means. We’re continuously learning, exploring, experimenting with different elements. It’s a constant growth process to write out what ‘anthem’ means to all of us!

ME: Do you aim to emphasize a collaborative aesthetic for the process of the eventual full-length?

Hope: We don’t have any plans for a full-length as of right now, but we will always act as a collaborative group when it comes to creating. Everyone in VISTA is equal.

Greg: Yeah, I’d say the effort would remain the same.

Matt: We’re all equals until we start playing Mario Kart (laughs)! But that’s a different topic for another day.

ME: All things considered, is it an especially gratifying feeling having this all work out and move forward?

Hope: For sure! This is the path that VISTA was meant to walk down—the people who were supposed to round this out. I don’t really see it as a revitalized lineup anymore; I just see it as VISTA! But it’s definitely comforting to be moving forward again.

Greg: It feels great that it all worked out. I’m glad we all came together. Now it’s time to do big stuff!

Matt: The lineup before Greg and I never played live. In actuality, it was kind of a clean slate for all of us. No one saw VISTA before Versus. So, when Greg and I joined it was kind of like, “Okay, THIS is VISTA.”

Greg: Hello, and thank you. Give Henchmen a couple hundred listens if you could! Or buy it! We love ya.

Matt: Without the fans, we’d be nothing. Period. Thank you for taking the time out of your day to listen to us and engage with us on social media and in person. We hope to see you all sooner than later. I see you U.K. fans asking us to come…I see you!

Hope: Thank you for helping us grow! You’re all awesome!

I come from a family who is passionate about all things music. I learned to sing at an early age, and by 13, had my very own Fender Strat guitar. I tried my hardest at learning all that I could. Because I was born with cerebral palsy, I had to teach myself an adaptive playing style. I learned to write and record my own music, despite these difficulties. In college, I started making great use of my writing abilities by reviewing music, as well as copy editing. I guess it's best to stick with what you know, while welcoming a fair challenge at the same time.
Previous Rock On The Range Sells Out In Record Time – +LIVE+ and Of Mice & Men Added To Lineup
Next SUNDARA KARMA Premiere 360° Live Video for Alt Radio Top 30 Hit “Loveblood”