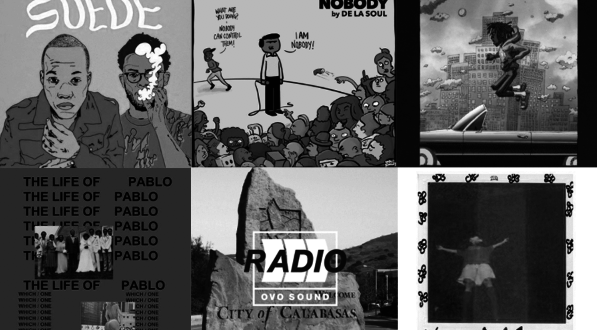 I’ll be the 7,000th person to say it: with 2016 being a hell of a year, at least we got some great albums out of it. Now that artists need to release an album a week to stay relevant, the influx of music coming out makes it hard for even the most dedicated of fans to keep up. There’s been hundreds upon thousands of lists of the best albums, but let’s take a look at a few of the best non-singles from those albums (and some songs that weren’t even on albums):

In a year saturated with music, Isaiah Rashad’s “Wat’s Wrong” is a true standout among a sea of tracks blessed with features from his illustrious TDE labelmate Kendrick Lamar. With a hypnotizing hook from newcomer Zacari, this track blends poignant verses with melodic vocals to create a piece that’s both melancholy and uplifting in the same breath. As the rap scene molds to encompass the new sounds of today, this song off Rashad’s studio debut, “The Sun’s Tirade,” is here to remind us what we already love about hip hop.

This is the year many of Drake’s day ones started losing faith in the music he continues to put out, but 2016 also gave us one of his most lyrical tracks to date. Whether or not you think Views was a disappointment or album of the year, one thing remains true, most of Drake’s best tracks don’t even come off his albums–like this one. Drizzy and Joe Budden both got off a few good jabs throughout their short-lived beef, but 4PM In Calabasas was arguably the best, not to mention unexpected after his lackluster shots during his Meek Mill beef. The best part about it is that the lyrics hit harder after Budden himself explained some of the bars directed at him, making them even more glaring.

(This is a single, but it’s not like we’re hearing this on the radio so give me a break) It’s rare you get a song title that encompasses the essence of the entire track, but “Suede” is about as smooth as it gets. With the combination of Anderson .Paak’s sultry vocal’s and Knxwledge’s sly production, it was no surprise that this collaboration was a match made in heaven. .Paak could sing literally anything and it would sound good (ie his Power 106 interview where he sings Llama Llama Red Pajama) but this track has clever lines that do that voice justice.

(Okay, this is definitely a single, but one of the best of the year nonetheless) There’s no way to put it more eloquently: this song is incredible. If anything was made solely for the purpose of screaming in the car at the top of your lungs, it’s this track. By 2016, we all know that there’s always going to be at least Rihanna song saturating the radio waves, and I would take “Needed Me” for 5 more years if it meant we never have to hear “Work” again.  DJ Mustard killed this beat without even one snap in sight.

There is no more difficult task for me this year than picking only one song as a standout off Blank Face, which holds strong arguments for album of the year. Legend has it that Q freestyled this entire track once he got into the booth–I have a distinct memory of a member of the Black Eyed Peas talking about the making of “My Humps,” and revealing that the song took 15 minutes to make from start to finish. 99% of people who’ve heard that song read that and thought, “well, duh.”–This isn’t one of those cases.  The rapping on this song is actual, dope lyricism and the flow brings back memories of West Coast classics. The production from one of TDE’s in-house producer’s Sounwave is incredible all across the board, but that sexy saxophone steals the show every single time.

Before I go into a rant about how all of Kanye’s albums are a separate journey and have different strong suits, let me just leave it at the fact that, for the most part, this is not an album focused on strong lyrics . The first impression most of us had of “Highlights” was from Hot 97’s own E Bro, who spoke of the opening Ray J line: “yeah he might of hit it first, only problem is, I’m rich,” explaining that it’s funnier when Kanye says it. Well, it isn’t….it’s pretty terrible. With that being said, this is a beautiful song, sonically. Young Thug’s echoing, “slow motion” in the background of the intro is the icing on the cake to his and Ye’s beautiful auto-tuned screams.

3 seconds into the song, that Jadakiss laugh over the DJ Khaled tag lets us know we’re in for something special. The biggest problem I had Major Key was that some of the dope verses from people like Nas and Kendrick were tainted being engulfed between corny hooks filled with DJ Khaled’s affirmations. This song has no hook, so the only thing tainting it is Fab’s verse. The instrumental of this beat could be part of an ill score for a horror film and perfectly fits the gritty theme of everyone’s lyrics. Fat Joe, Busta Rhymes, and Jadakiss all deliver some of the dopest verses of the year and hearing newcomer Kent Jones hold his own with legends is uplifting.

Coloring Book was on pretty much every year-end album list, but if this song would have made it on post-sample-clearing-issues, the praise would be even higher. The production on this track features kid-like screams and high-pitched sounds that perfectly juxtapose Mick Jenkins’ baritone voice on the first verse. His along with Chance and Alex Wiley’s verses all focus on similar concepts of apathetic people we are all too familiar with, while undercutting the idea that Chance himself is a grown ass kid in his own way.

Though we didn’t get a full SZA album this year like a lot of us hoped (and begged TDE powerhouse Punch for), this song was more than enough to hold me over. It’s an ode to PARTYNEXTDOOR and Drake’s track “Come And See Me,” but SZA’s dulcet voice adds different layers that make it all the more interesting. Both of the songs together serve as a beautiful back-and-forth of a male and female’s internal dialogue about one another’s request’s, but twoAM gives us a more raw, vulnerable look through the window pane.

The sounds of this song are as mysterious as they are intriguing, blending Asian-sounding elements with super slow scatting. Jarobi comes in first with his verse and his flow is something completely unfamiliarly beautiful; Q Tip caps off the track with another short verse detailing issues of spreading quality time between music and his girl. Other songs on this album might definitely be “better” and more developed, but this one is so sweet it often gets overlooked.