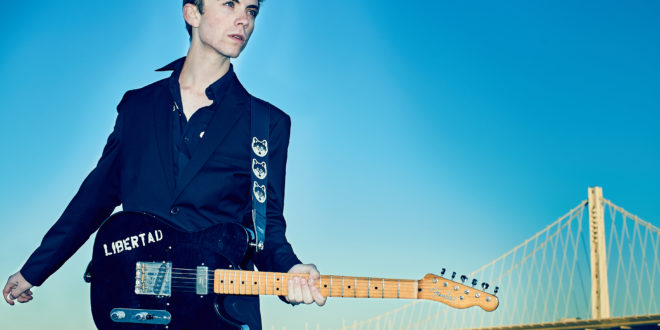 Matt Jaffe was discovered by Talking Heads’ Jerry Harrison when he was 16 and he hasn’t stopped making music since. In 2017 Jaffe will release, with his band The Distractions, California Burning which he also self produced. I got the chance to ask the man behind the album some questions about the LP and more.

1. Your lead single “Fire on the Freeway” was inspired about the California drought. What drew you to turn this environmental issue into a song?

The song is more about images than issues.  The environment is an issue, (and we’re all gonna feel it sooner rather than later), but I don’t like to preach.  I wrote this song because I had a cool blues riff and a head full of flame.  Then California’s Lake County started exploding and suddenly we had a topical song on our hands.  I’m drawn to the image of fire, but I don’t wanna confuse visuals with symbolism.  I believe in preservation and conservation and National Parks and making sure the California Condor doesn’t go extinct, but that’s why I’m a vegetarian, not why I write songs.

2. Talking Heads’ Jerry Harrison “discovered” you at an open mic night. What was that experience like for you?

It was pretty surreal.  It took me a long time to get over working with a musical hero and just get down to working on a record.  He had me working with the cream of the crop session players, and it was good thing I was 16 years old and didn’t grok the gravity of their involvement.  My naïveté allowed me to just climb a steep recording studio learning curve without being too overwhelmed by the heavy hitters in the room with me.  They say never meet your heroes.  Well, damn, it’s cool to meet your heroes.  Just try not to be in awe of them.  They’re humans.

3. Your album California Burning is realistic and quite dark. It has been described as a cross between something Raymond Chandler and Alfred Hitchcock could have concocted. It is certainly a far cry from the sunny California everyone associates with the state. Was this always the intent when you set out to make this album? Were there other ideas tossed around?

I could retroactively say we were trying to record our own California noir, but really we just picked the songs we enjoyed playing live and played ’em fast and loud to a tape machine.  This record is vaguely conceptual, but it’s not a concept album like The Flaming Lips Yoshimi or David Byrne’s Here Lies Love, in which an actual narrative encapsulates every song.  Better references might be Titus Andronicus’ The Monitor or Neutral Milk Hotel’s In The Aeroplane Over The Sea, where the concept comes from the concentration of ideas, not a storyline that weaves through everything.  I don’t think I have the attention span to write a narrative that lasts 45 minutes, so here you’ll just find a lot of lyrical graffiti, that collectively defines a point of a view for a moment in time – a little snapshot.  I’d like to write a screenplay someday, but this is more like a rabble of tone poems.

4. You self produced the album. What was that process like for you?

I don’t regret it, but I won’t do it again for a little while.  Creative autonomy is nice, but being the point person for everything is a cardinal sin.  For example, George Lucas shouldn’t have directed the Star Wars prequels.  He had too much creative power and that’s why they failed.  The original trilogy was a collaborative effort (e.g. Irvin Kershner) and that’s why they’re such a success.  When you’re the songwriter and the singer and the guitar player, it’s good to have another pair of ears who is gonna tell you when you’re trying to make creme brûlée out of molten garbage.  That being said, I wouldn’t change this record.  It came out raw and wriggling like we wanted it to, and a producer may have just impeded that process.  I’m lucky that I had engineers and bandmates who lent valuable opinions, but having a third party who can (theoretically) stay impartial and (theoretically) stay above the fray of interpersonal politics is a huge asset that a lot of young artists don’t seem to understand.

5.  California Burning was also recorded in five days. You have alluded to the idea that putting limitations on yourself fosters creativity. Was the rest of your band (The Distractions) as on board with that idea as you were?

I think sometimes the lead guitarist on the record, Adam, wanted a few more takes on his guitar parts than we wanted to give him, but generally, we were all hip to the rough-and-tumble process.  I hate movies and music that that only come into focus in post production (no amount of digital maneuvering can mask shoddy craftsmanship) so we expedited the sessions in part because of conflicting schedules and budget limitations, but in part because we wanted a record that sounded like a goddamn rock band in a goddamn room.  Nothing about that takes a long time.  Set up and play the songs.  I hope my bandmates are as proud of our recklessness as I am.

6. What was the idea behind the cover art?

We’ve got a song called “Hellhounds of Alcatraz” and I wanted to put one of these hounds on the cover.  I contacted about half a dozen different artists about doing the cover, sending them the song and the lyrics, and a high school friend of my mom’s, Tim Schlender, got back to me quickly with the terrific hellhound that now appears on the cover.  He also did a beautiful image of hellhounds running rampant through a panorama of the Bay Area that includes San Francisco landmarks like the Golden Gate Bridge, Coit Tower and the Painted Ladies.  But you have to buy the physical record to see that!  Originally, I thought we might press different versions with different artists’ takes on the hellhound, but Tim’s was so great that we scrapped that idea.

7. You cover Johnny Cash’s “Folsom Prison Blues.” How important was it to include that on the record?

Well, it’s kind of important, because when I give people the record, I can tell them that there’s at least one good song on there!  It’s taken me a long time to realize the value of a cover song.  I used to think it undermined the strength of the original music, but now I know that was foolish.  In our live sets, I find a cover song not only provides a guidepost for our original music, but it’s also a hook that makes it more likely that first time listeners will engage with the whole set.  I think of “Folsom” as a blueprint for this record.  It’s got trains (“Locomotive Lightning”), it’s got prison (“Hellhounds of Alcatraz”), it’s got California, and it’s got the punkified roots music recipe for the whole stew.  We put it last so at least you have to suffer through the 11 originals before you get to it.  And hell, maybe if you suffer enough you’ll even start to like a couple of the originals.

Right now, we have locked up a bunch of Bay Area dates for the first couple months of the year.  We’re looking into touring nationally although we’re still in the preliminary stages of planning.  Also, I’ve been trying my hand at cowriting, both with Tom Higgenson of the Plain White T’s and Chuck Prophet.  I’m looking forward to those collaborations finding homes on records and in live shows.  We’ll probably do another record soon, because the best thing to do while people judge your art is to make more art.  Andy Warhol said that.  I’ve found great peace in the cycle of “write a song –> record a demo for my bandmates –> start performing that song at shows –> record the song with my bandmates in a real studio –> get bored of that song and write some new ones.”  That just doesn’t get old.  When it does, maybe I’ll get around to writing that screenplay, but for now, expect a lot more songs.

9. What do you hope listeners will take away from California Burning?

I hope that they’ll understand the value of two guitars, drums and bass in a sweaty, cramped recording studio.  And the value of making mistakes and deciding not to correct those mistakes.  And the value of the quirks and idiosyncrasies that have been weeded out of so much popular music.  Mainly, I just want people to have fun.  Rock n roll is fun music, and you’re still allowed to dance to the beat when it’s a drummer instead of a drum machine, when it’s a telecaster instead of a MIDI keyboard.  Mainly, I just hope they’ll come away understanding that Hank Williams is the real godfather of punk rock.

Check out Jaffe’s song “Fire on the Freeway” Here! 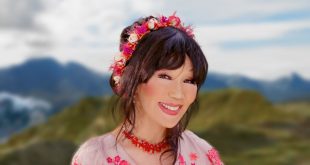