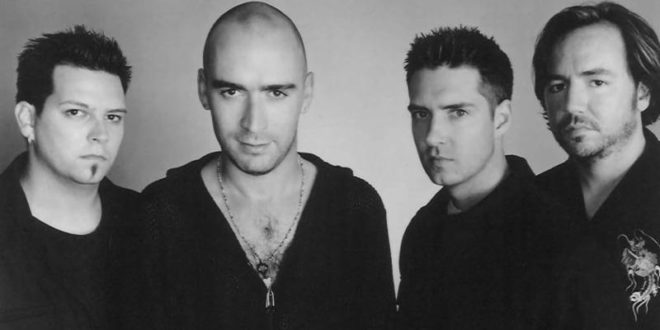 The original line-up of +LIVE+—Ed Kowalczyk (vocals, guitar), Chad Taylor(guitar, backing vocals), Patrick Dahlheimer (bass) and Chad Gracey(drums, percussion)–have reunited for a worldwide tour including North America in 2017. The band is now writing and recording new music TBA. *See the Q&A with the band below.

Known as one of the most potent alternative rock acts and concert attractions–with their powerful musical dynamics, vocal fervor and questing lyrics–+LIVE+will announce tour dates in the new year. The itinerary will be a mix of select headlining shows and key festival appearances.

2017 will mark the 25th anniversary of their debut album Mental Jewelry(released December 31, 1991). The multi-platinum band from Pennsylvania have sold over 22 million albums worldwide and earned two number one albums (Throwing Copper, Secret Samadhi). Their catalog is filled with such gems as “Lightning Crashes,” “I Alone,” “All Over You,” and “Lakini’s Juice,” which live on today as classics at rock radio.

The original line-up of +LIVE+ performed their last show in July 2009 before going off in different directions. Rediscovering their friendship has healed old differences, setting the stage for the four members to come together to make music again.

Q&A with +LIVE+
Can you talk about what led to the reformation of the band and the common thread that now unites you for this next chapter of +LIVE+?

Ed Kowalczyk: “After a pretty long break, it was exciting to find that we all felt, in a sense, like we were starting over again…albeit with this amazing foundation and fanbase all over the world that we have established. You could say we took the long road home, but it feels good to be back.”

Chad Taylor: “Ed, Chad, Patrick and I are no different than your average family. We might divide ourselves or argue fiercely but thankfully time, and the grand gesture of forgiveness, helps to heal old wounds. We’ve worked hard to restore the tenants of faith and trust that bonded us in the beginning. It’s doesn’t hurt that our fans offered so much encouragement!”

Patrick Dahlheimer: “Līve needs no better reason to reform than to spread some light in this time of confusion and unease.”

Chad Gracey: “One word, friendship. We lost our way with that a bit but are now back to being friends and respect each other again. That’s what counts.”

Can you describe the inner chemistry of the band and why it works to create a unique sound?

Ed Kowalczyk: “I think there is just this inherent understanding between us at a subconscious level when we play. It’s like we anticipate each other’s next move before it’s made and we all land together somehow. It’s that “something” that really good bands have that makes what they do unique. It’s also something that is easy to take for granted, especially as the years spent performing together go by. But the fans make sure to remind you how special it is…and we listened!”

Chad Taylor: “I’m much more appreciative of how profoundly lucky we were to grow up together. I think we lived within a two or three mile radius of each other for the first twenty-years of our lives. Our common experiences and love of music were drawn from the same sources. As teenage musicians, I don’t think we had the perspective to recognize how unique and fortunate we were to come from a blue collar town like York, PA. Coming back together and making music as we once did was effortless. More important, we’ve done the heavy lifting to restore and renew our friendship, and it all begins in that space.”

Patrick Dahlheimer: “Chemistry is everything with this band. We can speak musically to each other without words when in the creative zone. I have never experienced a musical bond so powerful, unique and unforgettable. It is wonderful to be able to experience it again.”

Chad Gracey: “CT’s quirky but amazing guitar parts. Ed’s out of this world lyrics and melody and PD and I holding down the rhythm is what makes LIVEs sound unique.”

The band is announcing headlining shows for next year as well as prominent festival appearances. At what point do you think the band will release new music?

Ed Kowalczyk: “We are writing and recording at the moment. We have mutually decided not to rush the next project. We didn’t want the pressure of completing an entire album hanging over us before we got out and played some shows. I think the idea at the moment is to just go with flow, get onstage together and see where all of this new energy takes us creatively. We might release something new in the form of a shorter release in 2017, in anticipation of larger project in 2018…stay tuned.”

Chad Taylor: “I had no expectations when it came to making new music. For the first time in our career there was no record company pushing us for new “product”. If anything, writing songs is more like the early garage days, no pressure and I think it shows in some of the work we’ve already done. We’re not focused on an album but rather seeing where we can take our creativity one track at a time.”

Patrick Dahlheimer: “New music is all around us and we have already captured some of it. Who knows when or if or how new music will come out. I’m living this Līve one day at a time.”

Chad Gracey: “We will release new music sometime in ’17.”

If you overheard one fan talking to another after a LIVE gig, what would you like them to say about what they just saw?

Ed Kowalczyk: “My goal onstage is to always have people leave feeling that they received something very special, an inspired feeling that they can take with them and into their lives. That’s what the artists I love have always done for me and that’s what I have always admired and tried to emulate in my own performances. I still believe that music stands alone in its power to communicate “spirit”, whatever that might mean to any given fan. It’s a mystery and it’s something I still find so exciting and challenging at the same time.”

Chad Taylor: “LIVE is back, and better than ever!”

Patrick Dahlheimer: “I hope that the words used to describe a Līve show would be emotion, power and joy. A sense of bliss when hearing the songs that they love.”

The multi-platinum band from Pennsylvania–Ed Kowalczyk (vocals, guitar),Chad Taylor(guitar, backing vocals), Patrick Dahlheimer (bass) and Chad Gracey (drums, percussion)–have sold over 22 million albums worldwide and earned two number one albums (Throwing Copper, Secret Samadhi).  Their catalog is filled with such gems as “Lightning Crashes,” “I Alone,” “All Over You,” and “Lakini’s Juice,” which live on today as classics at rock radio.Throwing Copper produced the band’s biggest single, “Lightning Crashes,” which was #1 at Modern Rock radio for 10 consecutive weeks.  Throwing Copper reached #1 on the Billboard Top 200 and eventually surpassed sales of 10 million albums sold with Rolling Stone honoring the album with placement on their “1994: The 40 Best Records From Mainstream Alternative’s Greatest Year.” Secret Samadhi (1997) immediately shot to #1 on the BillboardTop 200 and eventually went double platinum. The release of the platinum-selling The Distance to Here (1999) turned +LIVE+ into an international powerhouse and moved the band from arenas into stadiums. +LIVE+ has been and remains today a global concert juggernaut.