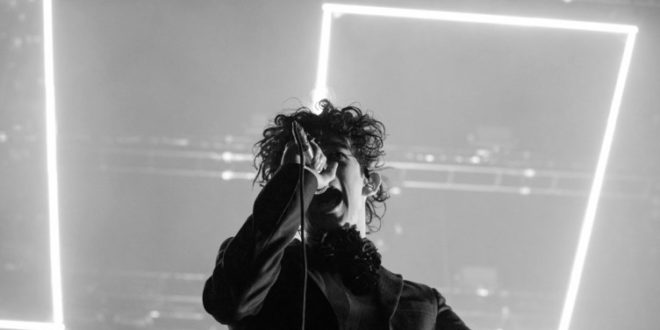 In their NME cover magazine, singer Matty Healy proclaimed that “this is our year” and their sold-out Newcastle show perfectly encapsulated the immense growth of the young indie band. The bands opening self-titled song sounded the emergence of indie’s finest whilst a singular pink neon rectangle shone amongst a diverse 11,000 strong audience. Mass hysteria broke out as the Manchester 4 piece strode on stage with excitement heightening as their award-winning lighting dwindled out commencing the start of what was a mesmerising performance.

It was a streamlined The 1975 of this years ‘I Like It When You Sleep For You Are So Beautiful Yet So Unaware Of It’ that conducted the proceedings, that record having finally given Healy, Hann, Daniel and MacDonald their leg up to arena filling status. Opening the show with their critically acclaimed dance floor anthem ‘Love Me’, an electric mix of screaming teenage girls and grown up indie kids loosened their checked shirts and moved to the bands enthralling back catalogue.

Spending his early years in Newcastle, being the son of North East actor Tim Healy, the performance was an emotional one for Matty Healy as he vocally reminisced of his youth to his spectators; unveiling a retro Newcastle United shirt as the theatrical backdrop transitioned to a vibrant city landscape for ‘UGH!’.

Their 24-song set list showcased each stage of the bands 14-year career with the welcome return of songs like ‘M.O.N.E.Y’ and ‘Medicine’. Toward the end of their astonishing set the band went back to their roots, performing fan favourites ‘Chocolate’ and ‘Sex’ with their new charm established by their latest NME Album of The Year release.

The performance was an artistic spectacle which is sure to be etched in the memories of those in the venue; with each enigmatic backdrop targeting an emotion, each song having a personal connection with every individual in Newcastle’s arena and each note bearing the sound track to thousands of teens lives. In the summer of 2016 at their Reading and Leeds performance, Healy stated that the band were going to come back and headline the festival. Although the statement was one not taken seriously, the group’s performance tonight showcased that they are continually growing and show no sign of stopping anytime soon.

Previous CAMDEN ROCKS FESTIVAL CONFIRM THE DAMNED, ORANGE GOBLIN, THE RUTS DC + MORE FIRST NAMES FOR 2017
Next Civil Youth Ring in the Holidays with Cover Video for “Let it Snow”