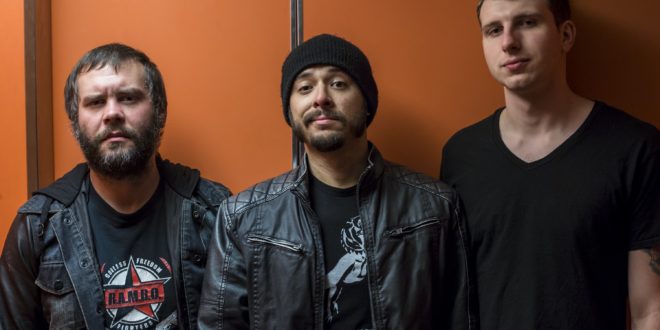 With their debut album Jousthouse, Minneapolis trio Late Night Fights are hoping to craft a name for themselves in the modern hard rock scene. For this project, the band have aimed to encapsulate the grittiness of grunge while also giving their music a more relevant approach in order to catch the attention of the modern rock listener.

The album kicks off with “Nothing to Lose” which carries a hefty and layered sound for something that is performed by only three people. It’s at this starting point that listeners will realize that Late Night Fights live up to their name because they deliver some fast, adrenaline-heavy music that is sure to rope in any curious rock fans who give this a try. This track in particular is slightly reminiscent of Red Fang, in that is embodies a bold, yet not overly theatrical piece of hard rock. Track 2, “Galvanize,” gives every member a chance to shine, especially bassist Shane Peckham who has a nice thudding rhythm to carry the track along. This works well with Daniel Johnson’s drumming which does a fantastic job of working alongside Peckham’s vibrating bassline and giving a heavy background for the bulky track. These elements ultimately mix together with frontman Ryan Guanzon’s gruff vocals. Guanzon’s voice can be scratchy, at times even resembling Andrew Falkous from Future of the Left, though it works well with the gritty music that the band is performing.

Track 3, “A Beautiful Lie,” seems to derive influences from the likes of Alice in Chains and Soundgarden thanks to Guanzon showcasing his impressive vocal range. The tracks “The Only One” and “Ode to Owed” have a more blues inspired force behind them which is just one of many moments that prove the diverse influences that Late Night Fights put into their music. Track 7, “Darkest Memory,” possesses a good amount of country influence due to its acoustic guitar work and noticeably slower structure compared to the rest of the album. The following track, “Dead Jesus,” is an unsurprisingly dark track though it works well thanks to its interesting string section which develops into an ominous and eerie moment in its entirety. It’s after this area, however, that the album begins to regress in its momentum.

While Late Night Fights are clearly enthusiastic about their artistry and use a good amount of influences for their sound, parts of their debut feel like they are playing a little too safe. Tracks like “Detonator” and “Saving Face” come across as being somewhat “by the book” in their songwriting, which makes them appear rather formulaic and cliched. While they aren’t bad tracks per say, they do feel bland and forgettable especially compared to the rest of the album which features more noteworthy performances and production. While not inherently bad, these later moments don’t quite pack the same punch that was prevalent in the first half of the record.

Jousthouse is a commendable debut for Late Night Fights and there is definitely a good amount of potential here. This record isn’t too flashy, though it’s without a doubt a solid piece of hard rock that took a notable amount of effort to create. While the album does tend to wear down and lose its edge towards the home stretch, the impressive performances that are present throughout the majority of the project more than make up for that fault. It’s not a genre-defying work of music but it does its job of being a satisfying piece of hard rock. For rock fans who care for grunge but also enjoy the likes of garage rock, blues, and even occasional country, then Jousthouse will surely be a pleasant listening.

Cain Miller is an aspiring writer who hopes to work his way up and gain notoriety for his material. Having written about film, television, music, and sports, Cain is always looking to gain as much experience as he can and continue to improve his writing abilities.
@cainemiller
Previous Rock am Ring & Rock im Park first headliners
Next CAMDEN ROCKS FESTIVAL CONFIRM THE DAMNED, ORANGE GOBLIN, THE RUTS DC + MORE FIRST NAMES FOR 2017