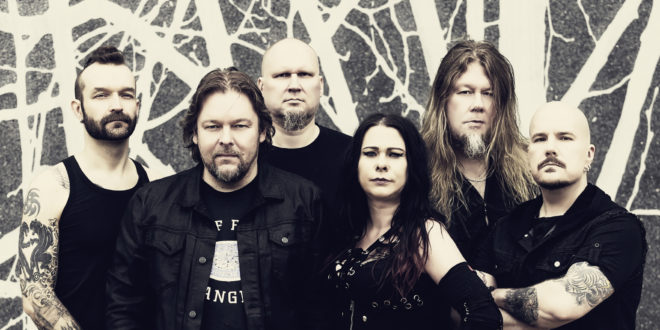 Finnish metal act Burning Point have returned with another full length record, The Blaze, to add to their growing collection of releases that date back to the early 2000’s. With heavy influences from the more classic metal eras like the 1970’s-80’s, Burning Point are known for their purist hard rock aesthetic that has pleased their listeners over the years. Having shown no signs of slowing down as of late, this record could prove whether or not the band still has the power to grow in artistry and keep making quality projects.

When the album begins with “Master Them All,” it is evident which direction Burning Point are taking here. With a sound that is clearly derived from the likes of Judas Priest and Iron Maiden, the band isn’t afraid to wear its influences on its sleeve. This track shows a good combination of the band’s well-structured instrumentals with lead singer Nitte Valo’s impressive vocals. This style continues in the second track, “The Time Has Come,” which features frequent synth use that is quite reminiscent of the theatrical metal style present in the 1980’s. This presentation might come across as slightly cheesy at first, though it quickly develops into a more full-fledged piece of metal. The guitar work sounds like it could have been created by the likes of Dave Murray and Adrian Smith, of Iron Maiden fame, and the vocals appear to take influence from powerful voices such as Rob Halford and Ronnie James Dio.

Other tracks like “Dark Winged Angel” and “Chaos Rising” feature some creepier instrumentals thanks to their Vincent Price-esque presentation, and offer a sound that comes across as a more toned down version of Ghost. These tracks can run the risk being too cheeky, though they walk a nice line between being playful and showcasing some seriously hard hitting music. Tracks like these, along with others like “Incarnation,” “Lost in Your Thoughts,” and “Things that Drag Me Down” have a more accessible approach though they don’t feel too restrained in doing so. It’s a nice helping of fan-friendly metal that unapologetically uses its influences to sharpen the band’s music.

While the album offers a nice dose of old school metal, one can’t help but wonder if the band is relying a little too much on the nostalgia factor from time to time. The Blaze is by no means poorly performed, in fact quite the opposite. However, while the homage to previous eras of metal are enjoyable, it can arguably become slightly stale towards the end of an entire album. When the album reaches the later tracks such as “The King is Dead, Long Live the King,” the theatrics have worn off to an extent and some songs tend to feel their length. With that in mind, the final track, “Metal Queen,” is a strong closer that breaks this trend thanks to its grandiose structure. With powerful vocal harmonies and thunderous instrumentals, this closer shows how good the band can be when they are firing on all cylinders, utilizing their strengths and thus putting together one of the best moments on the entire project.

While The Blaze has its minor setbacks, it’s hard to deny that the record showcases some well-conceived characteristics. This album is fairly similar to what Burning point have released in the past, but that isn’t automatically a fault on their part. It’s evident that Burning Point have found their niche and their fanbase will surely continue to grow throughout the years given how well they have performed throughout their career. Thanks to the band’s enthusiasm and Valo’s demonstrably good vocal range, Burning Point have crafted a solid work of hard rock that is a must-listen for fans of 1980’s heavy metal.

Cain Miller is an aspiring writer who hopes to work his way up and gain notoriety for his material. Having written about film, television, music, and sports, Cain is always looking to gain as much experience as he can and continue to improve his writing abilities.
@cainemiller
Previous Music & Bands
Next Gallery: The Struts at The Opera House in Toronto 12.13.16