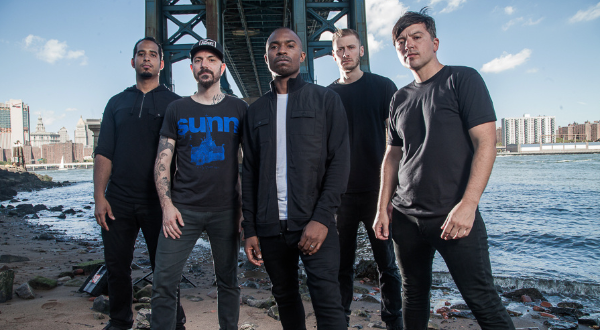 Brooklyn’s own Candiria have partnered with DecibelMagazine.com to bring you the video for “Wandering Light,” another powerful track off their new record While They Were Sleeping. It’s a concept album conceived by the band’s lead vocalist Carley Coma that tells the tale of a failed musician who rises up against a monarchy in New York City.

Candiria guitarist John LaMacchia comments: “‘Wandering Light’ is one of my favorite songs off of the new album so I am very happy it was included in the live Spaceman Sound Studio sessions. This version of the song includes an additional musical section that I feel adds another layer of excitement to the performance.”

About the song, Metal Hammer UK wrote, “‘Wandering Light’ encapsulates the quintet’s startling chemistry, as churning brutality morphs seamlessly into a brief, jazz interlude and back again, the whole thing sounding like nothing else on Earth: brave, smart, adventurous and joyously contrary to mainstream metal’s current creative inertia. But then Candiria were this brilliant 20 years ago too. Wake up, folks: herein lies genius.”

Fresh off a successful North America headline tour in support of the album, the band will head back out on the road again this upcoming January and February. “Candiria is extremely excited to get back on the road for the upcoming regional dates that we have scheduled,” asserts LaMacchia. “The band has been getting acquainted with both new and old material that we are looking forward to incorporating in our live set.”

Since their inception in 1992, Candiria have been lauded for their ability to mesh decidedly different styles in a seamless way. They were named one of the “10 Most Important Bands in Metal” by Rolling Stone back in 1999  for consistently releasing music that challenges listeners, thrills critics, and – most importantly – attracts a legion of dedicated, diehard fans. Their latest album, While They Were Sleeping, continues that legacy, with Pitchfork hailing the band as one of “the most convincingly flexible acts that metal and hardcore have ever seen”. To preview and purchase While They Were Sleeping, please visit here.