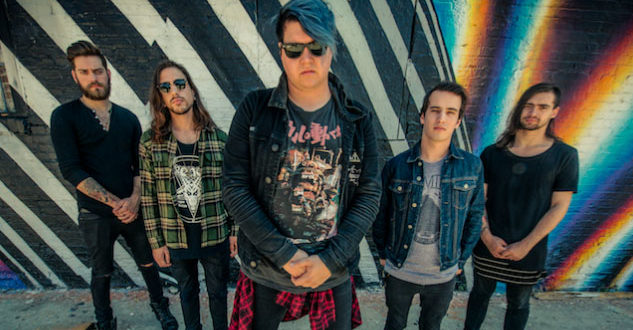 When thinking of the best words to describe post-hardcore band The Funeral Portrait, the words “complex” and “dynamic” come to mind. Gearing up to release thirteen tracks of pure angst, A Moment of Silence drops on December 16th.

The Atlanta-based five-piece is made up of Lee Jennings (vocalist), Juergie Landstrom (guitarist/vocalist), AJ Pekarek (guitarist), Chris King (bassist), and Stephen Danzey (drummer). In 2014 The Funeral Portrait made their debut with the EP For The Dearly Departed, which was produced by Shawn Milke of Alesana and Revival Recordings, who the band later signed with. Since then, the group was listed in the 100 bands you need to know in 2015 by Alternative Press and completed over 13 tours, sharing the stage with Alesana, Capture The Crown, IWrestledABearOnce, and Davey Suicide. Following the smash success of For The Dearly Departed, A Moment of Silence is unlike anything the band has done before. The Funeral Portrait reveals a more dangerous and honest side as they explore the journey of life after death. “In this universe there is eternity after death, but there is no god and there is no heaven. This man has been told his entire life that when he died, he would be greeted by God at the gates of heaven. Now he must drift and observe, waiting for the truth to reveal itself,” says Landstrom.

A Moment of Silence opens to the plucking of a guitar set over Jennings’ screamed lyrics in the title track intro. It paints a horror theme quite easily and the band quickly erupts in “unrelenting fury.” That momentum carries over into “The Water Obeyed the Gravity.” This song goes through many melody changes that keeps my interest piqued. The thrashing melody is so fully captivating that I hardly noticed that most of the lyrics are repeated throughout.

“Fate Connector” features an interesting opening that doesn’t go quite the way I expected it to, but I found it to be no less enjoyable. It’s as if I was left on a cliffhanger, waiting to see where the band was going with the grungy guitars and driving rhythms. The overlapping vocals in this track remind me of Hawthorne Heights, and the many tempo changes in this song make it truly dynamic piece.

Chunky guitars lead into “Shaking Hands,” and so far, the high energy that has strongly led the album shows no sign of ever stopping. This track is strong lyrically with lines like “A green face in the sky is turning. Jealous eyes see what’s behind the sun,” and the breakdown during the bridge is nothing less than spectacular.

“The Fear of God” is a quiet interlude that gives me the feeling of floating in the void. The calm is short-lived however, and leads to another full band explosion in “Like Father Like Son.” During the verses, Jennings’ vocals stand out from the melodies and blend back in during the chorus, allowing me to focus on the band as a whole.

The hectic opening in “Cerulean” feels off tempo to me, but it gives way to a more pleasing melody at the first verse. The rise and fall of the vocals are mimicked by the melody, and I feel like I’m lost in the ocean, a feeling pronounced by lyrics like “will I keep my head above water?” During the bridge, The Funeral Portrait changes things up again, lending themselves to a more metal vibe with heavy riffs and double bass drum kicks.

“Double Helix” opens with clapping in time with Danzey’s drums. The soaring guitars give this track an overall anthem feel, but just as I start to get into the vocals, Jennings gets lost in the strong melodies again. By contrast, “Save Yourself” is truly a listening journey. This number stands out from the rest of the album with strong lyrics like “What killed me might not make you stronger.” During the chorus, I get some strong My Chemical Romance vibes as Jennings sings “I know that the light never left your eyes, you need it now more than ever.” During the incredibly complex bridge, the band switches gears yet again. The melody becomes darker and more dangerous, leading me down another twisted road with an obscure destination.

The acoustic “Spark” is the only slow song on the album. Jennings vocals seem to call out from the void, echoing and existential as he sings “I spoke to God and he just stared at me with his tired eyes.” This track has a slow build to it that left me wanting a fuller piece, but the backward playback in the final seconds lead right into the next number.

The band serves up some outstanding technical guitar work in “Guillotine.” This final push is the strongest track on A Moment of Silence. Halfway through this dynamic number, the group immediately switches gears, becoming soft and quiet momentarily before turning the dials back to full-blast, as if regrouping to barrel through the rest of the song.

In preparation for the release of A Moment of Silence, The Funeral Portrait recently wrapped up a tour with Farewell, My Love and is currently on the road with Famous Last Words and Versus Me. You can preorder A Moment of Silence on iTunes, Google Play, Amazon, and the band’s MerchNow site. Be sure to give their Spotify some love too and check out the music video for “Like Father Like Son” below.

Previous The Order Of Elijah Announce Winter Tour With Upon A Broken Throne
Next Gallery: Suddenlash at Majestic Music Club in Bratislava, Slovakia 7/12/2016