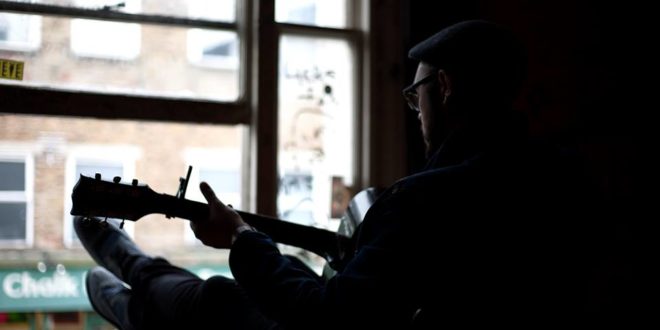 Robert J. Hunter’s dingy, multi-spectrum blues sound has earned him a surge of credibility in the UK underground. Originally from the Channel Islands’ Bailiwick of Guernsey, the now London-based singer-songwriter’s track record is presently burgeoning. At just 24, Hunter rocked the city’s big-name venues, namely Ronnie Scotts Jazz Club and the Spiritual Caiprihina Bar. But that is only the cherry that accentuates his artistry. Ultimately, Hunter’s foundation of musicianship—or ‘cake’, as it were—is his solid body of both band and solo material accumulated over the years.

His latest release, Where I’m From, marks the tenth in this series. According to Hunter, the album’s eight tracks were recorded over a two-day span, quick succession a primary component. “There is no time to dwell on takes; it is about capturing the music raw and in the moment,” he was quoted as saying. Indeed, the result doesn’t come off haphazard by any means. I found the main melody alone of the opener, “Growing Old,” to catch on instantly. It’s the combination of the guitar’s crispness, seamless pull-offs, and string attack that benefits the track’s rhythm. Atop this foundation, Hunter’s gruff delivery is pronounced but not as if to overpower the general melody. His pacing is solid, keeping a keen sense of balancing both vocal and melodic nuances. The electric lead bits also sit nicely at their individual wavelength without interference. Thematically, the album begins the natural steps of time one undergoes, coupled with the uncertainty of whether seizing an opportunity is possible at any given point. On “Wonderful Life”, the track to follow, there is an interesting melody implementation that seems to offset its concept. That is, a bright and serene chord sequence that characterizes the overlooking—and newly perceived drabness—of life’s simple pleasantries. This theme ends up working in conjunction with that of the first song, essentially an expounding on one’s cynicism of life as they age. At the same time, the next two songs “See You on Sunday” and “The River” deal with the importance of responsibility, whether concerning mending the synchronicity of a relationship, or seeking a place of peace to replenish mental health. Both songs showcase a skeleton representing the gradual return to normalcy, the latter taking on a more positive tonality.

As such, the flip side of the album carries along a peaked emotional growth. Its starter, “Island,” is a short, yet substantial boost of idyll in the transition from petty conflict. I enjoyed the addition of soft percussion as it resembled the kind of theoretical walk—one of confidence, while aiming to maintain a leveled head. From this particular point, I made note of how Hunter projects his vocals not only to emit angst and frustration, but a jovial and appreciative outlook all the same. Accordingly, “Go Easy” aptly demonstrates the notion of consciously slowing down. This is not by way of ruining one’s momentum; rather, it is taking the time to digest those happenings once taken for granted, even something as simple as, in the song’s context, a momentary smile. Further on, Hunter states an additional perspective involving the constant presence in an environment where one thrives, rather than fizzles out. By doing so, the inevitabilities of life, such as growing older, become mere afterthoughts. “Bigger Things,” the penultimate song, marks a newly mature revisiting to a problematic situation, particularly the disenchantment with lack of music success. However, by the inclusion of similarly styled percussion, it is implied that the issue can be worked out accordingly in simply looking forward. The solo also emanated a kind of ‘handle conflict by ease, not by rage’ aesthetic in both its placement and fluidity within the song. Finally, the closing “Way To Live” shows the extent of a drastically more grounded and refined outlook. Hunter’s style also veers away from a bluesy strut to an intricate, layered alternative grace. By this point, all of the components of maturation are taken in stride, and the time comes to reinvigorate a love life that was once on the rocks. The chord sequence during the chorus, by now an emphasized thankfulness of continued support, easily envelops Hunter’s vocals without restrain, while denoting that promising tranquility is on the horizon.

Overall, Where I’m From caps a retrospective journey toward renewed self-confidence. Each song represents a stage of growth, well thought out in not only highlighting its goings on, but how its undermining concepts are supported instrumentally. I have high hopes that this album will further instate Robert’s career transition, from the confines of the underground into a broader—not to mention equally affluent—listening audience.

I come from a family who is passionate about all things music. I learned to sing at an early age, and by 13, had my very own Fender Strat guitar. I tried my hardest at learning all that I could. Because I was born with cerebral palsy, I had to teach myself an adaptive playing style. I learned to write and record my own music, despite these difficulties. In college, I started making great use of my writing abilities by reviewing music, as well as copy editing. I guess it's best to stick with what you know, while welcoming a fair challenge at the same time.
Previous Top 10 Songs of 2016
Next Everyone Hates 2016 At The Revolver Music Awards