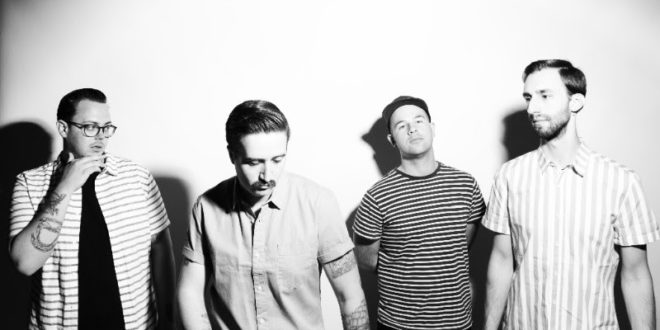 Dancepop band, Bearstronaut, just released a new video for their single “Begonias” off their newest full length album, Telecoast, which dropped in early June of 2016. The “Begonias” video is only a small part of the series of videos produced by Alex Enman that will be released later as a visual album.

Upon watching, “Begonias” instantly reminded me of a mixture of the 70s and 80s. From the frontman’s clothing to the overall aesthetic of the video, I was captivated by their individual style. The video is quite simple, but that is all it really needs for it to stand out in a crowd.

Frontman Dave Martineau sits with crossed legs and one hand over his right knee with a sorrowful expression written on his face. While Martineau, on the left, is facing towards the camera, I couldn’t help but watch the lyrics scroll up the right side of the screen.

After the first verse, the scene immediately jumps to a full shot, revealing the remaining members behind their instruments. As soon as the second verse begins, we are back to Martineau and the scrolling lyrics, leaving the audience with no other choice but to fully understand the meaning behind the track.

Madelynn is a photographer and writer for Music Existence, an honors student at the University of Texas at Austin, and a video game addict. Aside from photography and school, Madelynn spends most of her time playing with friends online or finding new artists.
@madelynnvphotos
Previous Everyone Hates 2016 At The Revolver Music Awards
Next Gallery: Set Your Goals at the Paradise Rock Club, Boston, MA 12/8/16