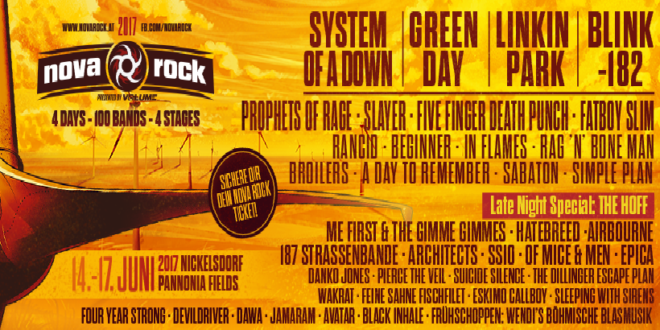 For the 2017 edition, Austrian biggest festival already announced the four bands that will headline the 13th year of Nova Rock: Green Day, System of a Down, Linkin Park and blink-182!

Beside these four, there are tons of other bands already confirmed including names such as Slayer, Five Finger Death Punch, Sabaton, Epica, In Flames, Airbourne or A Day To Remember and even more will follow in the next months!

The festival also changed the dates, instead of the usual second June weekend, next year Nova Rock will occur a little later on the third weekend – 15.-17. of June 2017 at Pannonia Fields II, Nickelsdorf.

You can buy your tickets at Oeticket, Musicticket, Eventim or at Raiffeisenbanken Österreichs.