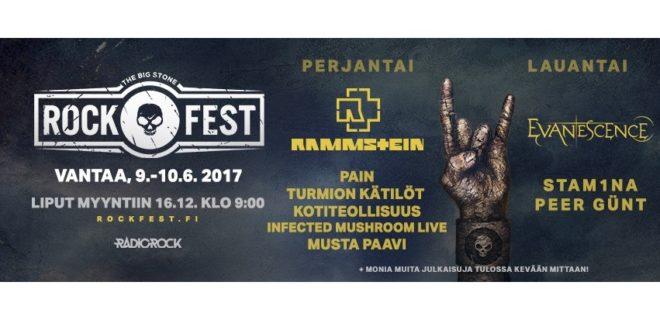 RockFest is a new world-class music festival in Vantaa, Finland. On its first year, the festival has two explosive headliners: Rammstein and Evanescence.

The epic line up consist of the top performers both foreign and domestic, such as: Pain, Infected Mushroom Live, Turmion Kätilöt and Stam1na. More performers will be announced during the winter and spring!

Festival will take place in the city of Vantaa, in a new festival area of Vehkala on June 9-10th 2017. You can easily arrive to the festival site by train from the Helsinki-Vantaa airport or from Helsinki City.

RockFest offers uncompromising rock music for its true fans, as many other festivals have moved from rock to pop. There is a place and need for a true ROCK festival. With two stages and two dozen artists, RockFest guarantees a full-blooded rock atmosphere with many activities and services. There is no age limit for the festival, but there are plenty of separate drinking and VIP areas for its adult guests.

Tickets go on sale on December 16th at 9AM!