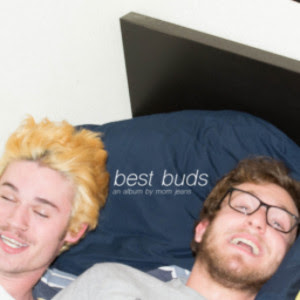 An act named Mom Jeans could sound like a joke project to other musicians and listeners, and the titles off Best Buds like “Edward 40hands” and “Scott Pilgrim V My GPA” don’t really help the matter. But don’t let the gimmicky names fool you, Mom Jeans album is surprisingly deep and worth a listen.

“Movember” is an acoustic guitar wonderland which really let Eric Bulter’s vocals shine as well as the honest lyrics which is what Mom Jeans does the best. It kind of has a Panic at the Disco feel but more bare and stripped back. Sarah Levy of Pity Party joins Butler on this track and her voice is a welcoming presence, pleasing to the ears, blending seamlessly with Butler. Towards the end of the tune the percussion kicks in and the production goes into high gear with a more mainstream sound, energized and punchy. The song would have been perfectly fine without this added layer, which includes some chanting arena style delivery, but it fits in with the indie/alternative groove that is what Mom Jeans is known for. As stated before, the lyrics are where Mom Jeans really spotlights their talents. It’s brutal and blunt at times, It starts off with the line “Why you gotta be so f*ckin mean,?” which sets the tone for the rest of the song about a toxic relationship and gives listeners a window in to a situation that is personal and almost makes us feel like we are a fly on the wall of something we shouldn’t be hearing. Don’t just take my word, listen for yourself and see what Mom Jeans has to offer.

The aforementioned “Scott Pilgrim V My GPA,” which is a reference to a comic series turned movie, has nothing really to do with the title. It’s a ballad which mostly is acoustic guitar with some drums, but has a strategically placed horn instrumentation that elevates this track from other run of the mill ballads. Simple is sometimes the best route to go and Mom Jeans uses that method to deliver one of the best tracks on the album, really gutting its listeners. “You think I smoke too much/I think your friends all suck,” Butler plainly speaks, not holding anything back, something the audience has come to expect from Mom Jeans. If the song doesn’t hook you from note one, by the time it swells it will be hard not to fall under the track’s spell. Bittersweet and haunting, the final repeated lines of “I sleep well alone now” are sad and beautiful and something that will stick with one well after the first listen.

“*Sobs Quietly*” is under two minutes long but that is all that Mom Jeans need to tell their story. The start of the song has a retro 50s feel going for it that separates it from other tunes on the album and is frankly quite refreshing and up this reviewers alley. “I’m getting better at crying without making any noise,” Butler sings achingly from the heart, never shying away from the truth. It may be the most stunning moment of the entire LP, raw and painful. What starts off as a midtempo ballad quickly turns into a thrashing piece of music, heavy, but also an explosion of sound that matches the lyrics note for note giving the song a second wind and turning the tune into something more than just a standard love song.

There are moments on the LP that are less than stellar like “Danger Can’t” which is lacking in the vocals department and a bit uninspired,d and “Edward 40hands” which blends too well into the album and doesn’t offer anything new to what Mom Jeans has already showcased.

But the good far outweighs the bad here and if one can look past the silly song titles and actually give the music a chance one might find themselves becoming a fan of Mom Jeans.