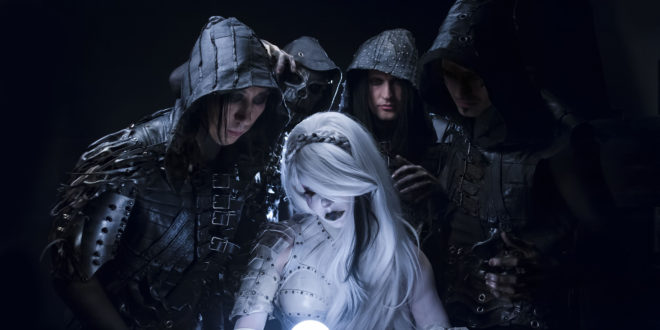 September Mourning is reviving the gothic rock opera with their full-length debut, Volume II. Available now, this album’s 12 tracks weave a thrilling narrative following a heroine who narrowly saves pure souls from the appetite of Fate.

2015 saw the band’s USA debut with the well-received EP Volume I, which was released alongside the first issue of the graphic novel series, A Murder of Reapers. The group toured in support of the EP, sharing the stage with the likes of Marilyn Manson, Avatar, Otep, and more. After signing with Sumerian Records earlier this year, September Mourning dropped Volume II along with the second issue of the comic series entitled The Hand Of Fate. Produced by Sahaj Ticotin (Sevendust, Ill Niño) and Howard Benson (My Chemical Romance, Skillet), this album is the musical adaptation of the September Mourning series, featuring September as the frontwoman, a human-reaper hybrid on a mission to defy Fate.

“The Collection” is a quick introduction to Volume II and serves as a call to the misfits and outcasts to come together. In “Angels To Dust” I was immediately struck by the melodic similarities to Stitched Up Heart’s “Catch Me When I Fall.” This fatalistic track is full of twists and turns, switching easily between high intensity and soft harmonies. September’s vocals make this song unique with a sound somewhere between the swagger of Ash Costello (New Years Day) and the raw power of Maria Brink (In This Moment).

A narrator interlude leads directly into “Eye Of The Storm.” This number is where Volume II begins to feel like the story it’s meant to be. The hard-hitting guitars ramp up the empowering atmosphere as September’s siren vocals sound off the beginning of a march to better days.

The futuristic melodies behind the verses in “Before The Fall” allow the band to come in stronger during the chorus. I am over the moon for Stitch’s drumming in this number. He truly sets the mood with rapid cymbal taps and just the right amount of bass kicks. In contrast to the vigor of the rest of this track, September’s vocals take on a wispy quality during the bridge as she hits falsettos with ease.

“Children Of Fate” features a spoken word opening that plays as corrupted audio. The swaying vocals ensnare my attentions as September commands control over Fate. The guitar riffs in tandem with the background melodies give me visuals of an all-encompassing fire while lyrics are screamed out against oppression. Bringing this track full circle are spoken existential questions that lead directly into the next song.

“Skin And Bones” is easily my favorite number on Volume II. The full melody is saturated with gothic darkness set to Stitch’s stellar drumming. This song is also incredibly strong lyrically, opening with “I’m breaking up. I’ve been beaten down, run around, know that I’ve had enough of the spotlight.” The infectious chorus is where the true power of the band stands out.

The background vocalizations in the single “20 Below” lend this song an 80’s metal feel. The driving guitars set over booming drums drive September’s siren voice to an enchanting swell. I only have one small issue with this number – the brief guitar solo. The muted delivery makes it very easy to miss the wailing and I would have like to hear it more clearly. However, “Heart Can Hold” starts off with a distinct, sultry solo over furious riffs that set the stage for September’s sensuous delivery of lyrics that are full of uneven love.

The opening of “Superhuman” is somewhat awkward with time signatures, but it smooths out nicely at the pre-chorus. September Mourning uses this track to show their versatility as they transition from the strong gothic sound into two hard rock anthems. “Live Like You’re Alive” is the opposite of “Superhuman,” starting off strong and well-rounded, but it gets muddled during the chorus. The guitars play in a deeper register in contrast to September’s higher vocals, leaving the melody sounding flat to my ears.

The band’s incredibly dark and morbid cover of Ben E. King’s legendary “Stand By Me” gives me strong Marilyn Manson vibes. Just past the 3-minute mark, September Mourning turns back to the overall theme of the album, leading directly into “’Til You See Heaven.” This slow number has an undeniable fatalistic quality to it with lyrics like “Cause your heart can’t beat like this forever. If we go down, we go together.” With the sweeping melodies featured throughout, this song is a perfect conclusion to the heroine’s chronicle that feels less like a final bow and more like a victory parade into the afterlife.

Translating a graphic novel into an album is not something I’ve ever heard of before, but September Mourning has delivered a full and comprehensible story with Volume II. You can grab a copy of the album on iTunes, Google Play, Amazon, or listen on Spotify. Be sure to check out the animated lyric video below for “Skin And Bones,” featuring art directly from the September Mourning series.