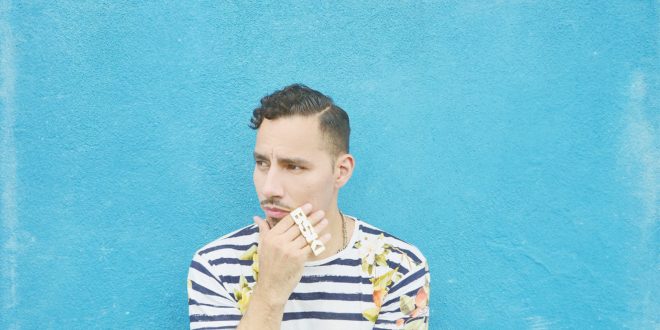 BSKi, a singer from New York that blends Latin rhythms with 90’s R&B, Funk and Hip-Hop in a style that he refers to as “sancochofunk” released his debut EP, Keep it Light, today. I got the chance to listen to it. The 5 song album is a great representation of himself and he says, “Both musically and lyrically, these songs sound and feel more like me than anything I’ve ever done.”

The first song, “Say Hello” starts out melodic, smooth and soulful. It’s the kind of song you could put on during a dinner date at home or slowly dance to in front of a fire. BSKi’s beautiful voice serenaded me while background singers “oooooh” in harmony. It feels very reminiscent of Stevie Wonder.

“Let Your Hair Down” Reminds me of an R&B song from the 90’s that you’d hear on the radio and then wait for hours for it to come on so you could record it for your latest mixed tape. On the surface it sounds like a cool R&B song with its chorus, “I wanna rock into you” but you soon realize the snark when he then sings, “What does that even mean?”

The third song on the album starts out with a great beat that immediately had my head bouncing and your feet tapping. “Starbound” is a song about an up and coming actor that leaves for what is presumably LA to pursue her dream. The lyrics, “I guess you’re star bound after all,” suggest he’s happy for her as she takes off to follow her dreams but it is quickly followed by, “It ain’t no thing, I’ll catch you when you fall.” It’s then I realized that it’s not as uplifting a song as it appears. I won’t spoil the rest of the lyrics, but they are really funny as they get more sarcastic as the song progresses. This is my favorite off the album and it will have everyone dancing at live shows for sure.

Bringing it back to the slow R&B feel is “Splanky” a song about a ball player named Tito that suffers the fate that a lot of athletes face. They get really famous and do really well but then an injury happens and they are finished. The album title comes from the chorus, “Baby, keep it light.” This has a good beat with an amazing horn sound throughout the song and a horn solo to end it. BSKi’s vocals are really showcased throughout this song.

The last song is “Good Idea” and once you listen to it, you will probably agree that it’s anything but a good idea.  This is another beautiful smooth R&B song. This is the kind of song you’d hear at the middle school dance while try to work up the courage to ask that shy boy to slow dance. The song talks about what it would be like if someone told you right upfront how the entire relationship would be like. “I’ll be careless with your heart. Won’t finish what I start.” It definitely emphasizes the blues part of rhythm and blues.

Overall, I loved the album and will have it on repeat for a while. The album is out today so if you are a fan of good music, go get it. You can grab it here.

I got a chance to chat with BSKi about music, the EP and life in general. You can find the interview here.

Fun Loving Music Photographer and lover of live music in general. I am most likely to be spotted with a coffee in one hand and a camera in the other, somewhere in Philadelphia, New York City and everywhere in between. For more of my music photos: http://myphotos.bellemorephotography.com/
@bellemorephoto
Previous Album Review: September Mourning – Volume II
Next Interview with BSKi