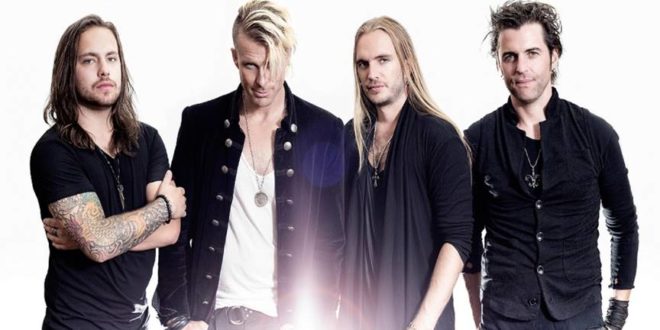 The band’s Jonny Hetherington stated: “Torn Down” was inspired by the story of a teenage girl, Amanda Todd, who lived near me in Vancouver. She was targeted by a sexual predator online and eventually committed suicide. It’s a very sad story that she told personally through a self-made YouTube video. Her story affected the community deeply and it hit me hard when I discovered it. I hope the lyrics in “Torn Down” will help others who are going through what seem like hopeless struggles – see a light at the end of the tunnel.

We shot the video on our 2016 NEVERMORE Tour with Director Davo Paul, who travelled with us and captured Art of Dying’s life on and off the stage. Thank You to Count’s Vamp’d and all the fans in Las Vegas!”

Art Of Dying recently released the Nevermore EP, getting back to their independent roots after two critically acclaimed and widely-played major label albums (2011’s “Vices and Virtues” and 2015’s “Rise Up”). We have circled back to our roots on “NEVERMORE”, states guitarist Tavis Stanley, ”working with long-time collaborator and producer Mark Holman.” “A lot of the lyrical content on this EP is about overcoming adversity,” continues Hetherington. “About taking yourself beyond where you thought you could go… about stepping away from toxic relationships.”

The band has also launched a Pledge Music pre-order campaign to fund a new full length album recording for 2017 where fans can participate to receive the new CD, plus get regular updates and donate extra to receive some special incentives from the band.

The band is launching their New Year’s touring efforts by taking part in the “ShipRocked” cruise January 16th – 20th, 2017.

Previous Darku J Teams with Styles&Complete and SISTERWIFE on Explosive Techno-Pop “Kick In The Bass”
Next New EP from Chann3l, Frozen Shatter