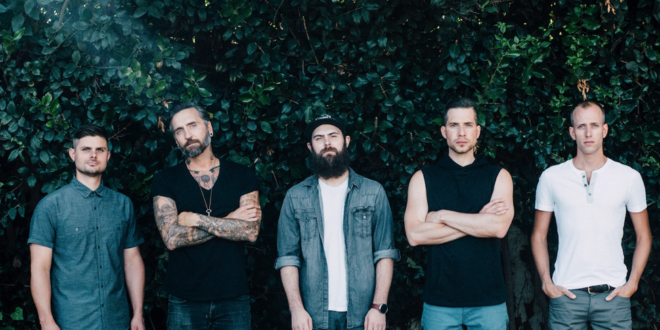 It’s been just over a decade since Acceptance made an impressive mark on the music scene with their full-length, major label debut effort, Phantoms. The Seattle-based band may have been quiet since their 2006 breakup, with members falling into their own lives across the country, but their fan-base only continued to grow… and grow restless. It was an offer to play the 2015 Skate & Surf festival that became the catalyst for ACCEPTANCE’s inevitable reunion. With inspiration ignited, the band began writing together again and released a new song, “Take You Away.” Not wanting to stop there, they decided to continue exploring their musical bond and began working on a new album, Colliding By Design.

The band recorded the album from late 2015 through the spring of 2016 in Seattle and Nashville, with producer, Aaron Sprinkle (Anberlin, Copeland, MxPx Emery). “Aaron was instrumental in honing in Acceptance’s original sound,” Christian notes. “Some of the coolest moments and coolest ideas on Phantoms came from him. Aaron helped us, pushed us and expanded our instrumental abilities. He has been doing the same thing on this record.”

There was a lot of discussion early on in the album process of how to bridge the gap between Phantoms and Colliding By Design, which is named for the sense that fate has brought the musicians back together again. “We’ve gone through different parts of life and grown musically and creatively and personally,” Jason says. “We wanted to tap into what we were feeling at the time and it may or may not be completely relevant to Phantoms. We wrote the music that we loved to see what happens, which is exactly what we did last time. We really were in love with Phantoms and we wanted to capture that feeling again. The band has always been about impacting the world and the people who are listening to the music. We want to continue to connect with people and stir up strong emotions with every song we write.”

Acceptance’s new single, “Diagram of a Simple Man,” finds that perfect balance between the bands beloved signature sound and their natural evolution as musicians.

Their highly anticipated record, Colliding By Design, is due out on February 24, 2017.Fans can pre-order the album (with “Diagram of a Simple Man” instant gratification track) on iTunes tomorrow, December 6th, and physical pre-orders available today HERE. Colliding By Design will be released on the bands new label home, RISE Records. Label president Craig Ericson couldn’t be more thrilled, sharing “I’ve been a fan of Acceptance since the early 2000’s, anyone who was paying attention in the Pacific Northwest quickly took notice of what they were doing. They have picked up where they left off, and we couldn’t be prouder to be working with them!”

With this album comes a new beginning for Acceptance. It’s not a reunion, but an actual rebirth, giving Acceptance a second chance to carry on what their music is and can do. “This process has been really fun,” Jason says. “I like the idea of continuing to make music and release it in various ways. We’re so grateful to have a second chance at this and I think you can hear that in the music.”

* – with Taking Back Sunday

Previous Review & Gallery: The Wizards of Winter at St. George Theatre in Staten Island, NY 11/25/2016
Next Darku J Teams with Styles&Complete and SISTERWIFE on Explosive Techno-Pop “Kick In The Bass”