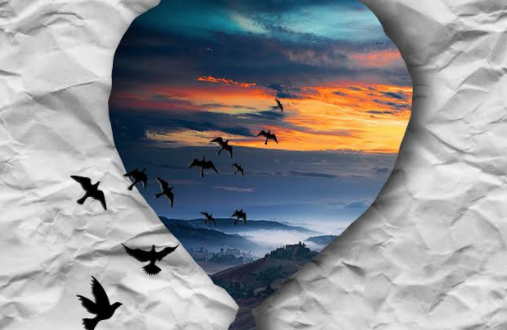 Meet Trell Love: An up-and-comer  from “the side,” a suburb right outside of Chicago, Illinois. Though he’s fairly new to the scene, he’s already performed at big name festivals like SXSW’s Hustlepalooza Show & Atlanta’s famous A3C. His debut EP “Waiting On Forever” dropped today, and was produced in full by The Gift, who you probably know from his work with MMG’s Rockie Fresh. Everything from the music to the album art was created together by these two powerhouses, making every element of this project intimate and undeniably true to the artists themselves.

Before “Waiting on Forever,” Trell had a whole project done that couldn’t be released due to a rough management deal. He found himself stuck in a toxic mind state–with both of his parents sick and being in an unhealthy relationship, along with the racial injustices happening increasingly everyday, he knew he had to document his journey in a therapeutic way.

That’s how we got blessed with this very special project. It’s short and sweet; with only 6 songs, this EP manages to pack a powerful punch. Between melancholy personal anecdotes and cleverly-funny-yet-heartwrenchingly-true punchlines about racism, each song blends together multiple storylines seamlessly.

It’s hard to pinpoint any one track as a standout, because every song holds an important part in the journey of this EP. We start out with “Black Skin,” which walks on the tightrope between his personal relationship struggles and going to war with black hoodies on paying tribute to Trayvon Martin. Most of the songs on this project do that same thing effortlessly–detail intimacies of Trell’s life while highlighting the blatant issues of racism–but do so in a fresh way every time around.

“Champagne & Cigar Smoke” is home to some of the most poignant lines in the tape. Despairing truths like “black boy, black boy, boy you not a man, we hate your bitches too look how we did Sandra Bland” and “pretend to hate your beauty then appropriate your culture.” This song goes through waves of detailing those issues and truths about smart phones making us stupid, all without minimizing one another.

We come to a sweet ending with the title track, “Waiting On Forever,” a exclusive look into Love’s life. It seems like things can’t get any worse: both of his parents were striken with cancer, his relationship is awry, and none of his day-ones are there to help him see the light. This track is relatable to a lot of people’s personal struggles while still making you thankful for all you do have.

A project and artist like this is difficult to classify. One might compare him to Common because of his heightened stance on social issues or maybe Mick Jenkins because of his smooth voice, but it’s better if you just find out for yourself. You can stream Trell Love’s important inaugural journey “Waiting On Forever” on Soundcloud and Apple Music now.