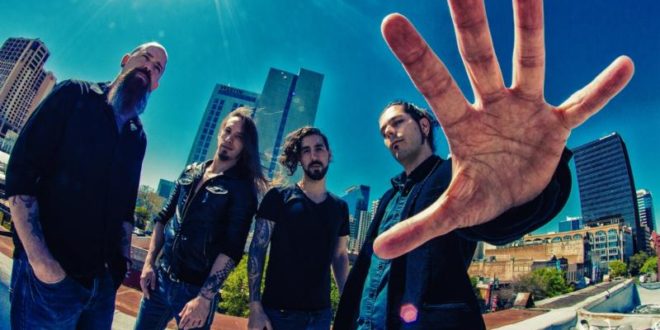 SEEK IRONY vocalist Kfir Gov shares his thoughts on social media and technology’s impact on society: “The message of “Running Towards The End Of The World” is that although technology and progress is awesome, we need to step back for a second and reevaluate the sacrifices involved, such as a) losing touch with our human connection (people these days live very lonely lives and barely understand what real friendship even means anymore, we’ve traded real human connection with a social loneliness of sitting in front of a screen all day), b) we’re in a great rush to give up every bit of what is barely left of our privacy, and c) we’re giving very few corporations a lot of control very quickly, before we even have proper legislation and rules on what they are allowed or not allowed to do with all this information that they are collecting on all of us. It’s not all bad of course, there is plenty of good involved in social media. But at times, it just seems like it has become a little too much of an intrusion in our lives.”

SEEK IRONY‘s breakout album, Tech N’ Roll, was released via UDR Music earlier this fall. Upon its initial release, Tech N’ Roll became a raging success in underground rock communities internationally, and SEEK IRONY built further upon a history which had already seen them headline festivals in Tel Aviv and Haifa, Israel as well as featured as a showcase artist at the South By South West Music Festival in 2014. Since then, the band was awarded the “Album Of The Year” accolade at the 2016 NAIRMA Awards, in addition to also playing BatFest in Austin this year.

Tech N’ Roll boasts a heavy rock and electronic mixture with an alternative rock edge – chock full of loud, live and explosive musical energy. Lyrically, the album touches upon topics ranging from technological influences on society and foreign politics, but doesn’t forget to have fun with fan-favorite anthems.

Get another taste of Tech N’ Roll via the band’s previous music video for “Devil In Me” here.

Tech N’ Roll was self-produced by the band at their own Keoss Studios in Tel Aviv, Israel and Evil Snail Studios in Austin, TX. The album was mixed by Phil Anderson at Powersound Studios in Edmonton, Canada and mastered by Maor Appelbaum (Faith No More, Yes, Sepultura, Ill Nino, Starset) at Maor Appelbaum Mastering in CA.