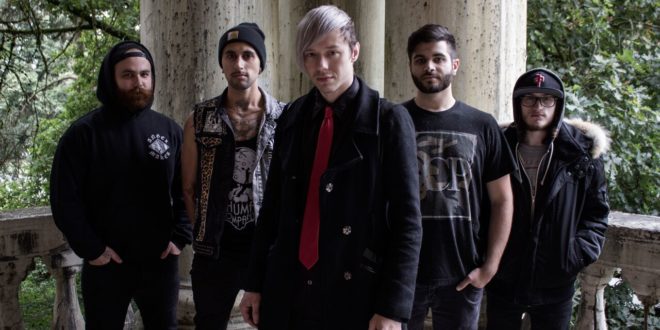 Hailing from British Columbia Canada, metalcore quartet Galactic Pegasus are looking to make a big splash in the music scene with their first full length release, Phantom of the Hill. Having been formed just back in 2012, Galactic Pegasus are still in the process of climbing the rankings of metal music, though they have gained some noteworthy notoriety in their young careers so far. Now that they have a full album under their belt, Galactic Pegasus can prove their true abilities as musicians.

Phantom of the Hill doesn’t take its time in order to give listeners a taste of its sound. Track 1, “Jenova,” jumps right into the band’s aggressive style. Clocking in at just over a minute, this track is short but sweet and it indicates what listeners can expect for the rest of the album, which consists of heavy guitar work, pulsing rhythm sections, and blood curdling screams. “Jenova” isn’t extremely flashy with its presentation considering its minuscule runtime, especially for a metal piece, though it’s still a nice jolt of adrenaline that paves the way for the second track, “Bottoms Up.” With a slightly more appropriate length of almost three minutes, “Bottoms Up” gives the band a chance to better showcase their ability to craft songs, and it works well in their favor. This track offers a slightly more catchy style thanks to its use of clean vocals but it still carries the heavier nature that was previously showcased at the beginning of the album.

The album truly picks up at track 5, “Thanatos.” With instrumentals that border on drone metal, this track is able to progress at an appropriate length and show how well Galactic Pegasus can be at constructing heavy metal. Vocalist Andrew Hockley sounds his best here and his performance gives the track a dark, brooding structure. The album continues to impress with tracks like “Revival” and “Hypothermia” which offer a more layered construction of instrumentals that works well with the band’s heavy sound. Track 10, “Mare Imbrium,” has more of a slowburn surface to it, which shows that the band is equally good at creating slower tracks along with their more brutish style that they have already showcased. This all leads up to the final track, “Beauty,” which possesses the same slower, dreary sound that “Mare Imbrium” had though it blends it with the heavier nature that was prominent earlier on the record. Utilizing both screamed and clean vocals in an impressive manner along with building, hard-hitting instrumentals, this track embodies all of the band’s strengths in one complete moment. Needless to say, “Beauty” is a defining moment on the album and was a wise choice to close with.

While Galactic Pegasus possess a strong sound, their presentation also contains some common issues that some may find within the metalcore and djent genres. While the music is well played, it can definitely feel repetitive which ultimately leads to a slightly generic listening experience at times. While it helps that the songs are shorter than what one would find in the djent genre, the repetitive instrumentals can make the album occasionally feel its length. On top of that, the lyrics can add to the trend of 2000’s metalcore being fairly melodramatic. The songwriting can feel out of place when paired with the heavier instrumentation, like in the tracks “Hourglass” and “Homecoming” which can get somewhat cheesy with their lyrical content. Moments like this tend give the album a somewhat conflicting sound and can distract from the more impressive components that the band has to offer.

Overall, Galactic Pegasus aren’t necessarily reinventing the wheel with their full length debut in terms of what metalcore can do, though that’s not an overbearing fault on their part. Galactic Pegasus have established a style that works for them and that sound will certainly continue to garner them fans from this point on. For those who enjoy the brand of metalcore that was especially prominent in the 2010-2012 era, then Phantom of the Hill will be a must listen. For what it is, Phantom of the Hill is a solid addition to the metalcore genre and now that Galactic Pegasus have proven to be a strong force, it will be interesting to see if they can continue to progress their sound and develop their own niche in given time.

Cain Miller is an aspiring writer who hopes to work his way up and gain notoriety for his material. Having written about film, television, music, and sports, Cain is always looking to gain as much experience as he can and continue to improve his writing abilities.
@cainemiller
Previous 10/4 ft Sparks – Viben
Next Check out Valerie Orth’s new Single “Pixie” / show tomorrow in NYC