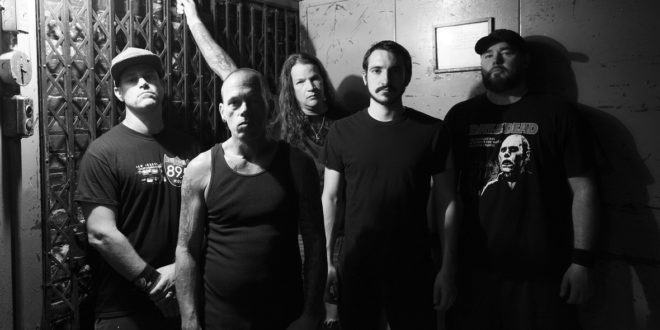 New Jersey based Metalcore band Negative Sky has released the Official Music Video for “The Dark Unknown”, off of their upcoming album PLACID BLACK. “The Dark Unknown” was directed by Tommy Monahan at Bob Pantella’s House of Sonic Love in Keyport, New Jersey.

Even though we spent 8 hours playing the song through 14 times and it was 119 degrees under hot lights in a warehouse with no AC, it was some of the most fun I’ve ever had! – Danny Puma

Negative Sky is an aggressive and thought-provoking Metalcore group, based out of Central New Jersey. Utilizing a diverse mixture of heavy groove, technicality, melody, and attitude, they make the kind of music that immediately sets them apart from their peers. They defy boundaries, and leave lasting impressions distinguishing them as a one-of-a-kind hybrid of the various genres they experiment with. The key to their style is innovation, and amplifying the instinctive ”feel good” sounds that trigger something within each and every one of us.

Negative Sky came into existence in the Summer of 2011, with Dan Caputo(vocals) and JJ Sammataro (guitar), beginning a new chapter, one which saw bassist George Pond and drummer Tom Fitzgibbon completing the quartet. The initial focus of the band was to captivate a live audience. Their sense of urgency to accomplish this was so strong that Caputo performed, with lyrics in hand, at their first show, and they completely blew the crowd away! They continued to fine tune their energetic and aggressive live show, performing in several Tri-State area venues. They performed with such noteworthy acts as: Hatebreed, Biohazard, Cro Mags, E Town Concrete, Life of Agony, Madball, and Vision of Disorder (VOD), to name a few. Negative Sky has also become a favorite to the listeners, as well as the DJs, at WSOU, Seton Hall’s “Pirate Radio,” the Nation’s #1 Hard Rock and Metal broadcast radio station, as well as various other terrestrial and internet radio stations around the country.

In 2013, the guys began work on new material. After demo-ing a large number of songs that had come together, the band settled on five songs to take into the studio, which would become their latest release an EP entitled Death of the Sun. The title track and the song “Disasteroid,” both did well with radio and the latter has become a fan favorite and pit anthem.

The next step for the band was to record the new songs written during the time spent supporting DOTS. They were fortunate enough to have Corey Pierce of God Forbid help flesh out some parts and arrangements on several tunes. The guys had a full length album’s worth of material so they holed up at Conclave Studios in NYC and meticulously recorded what has become Placid Black. Once the recording was done, the band wanted to thicken their sound so they invited Danny Puma to become the second guitarist for Negative Sky. This dual guitar incarnation of the band enables the band to give a much more true-to-the-recording representation of the entire NS catalog. The first single, “The Dark Unknown,” as well as the video, will be released at the end of 2016. The success of Negative Sky has been picking up steam like a runaway freight train and it shows no signs of slowing down.