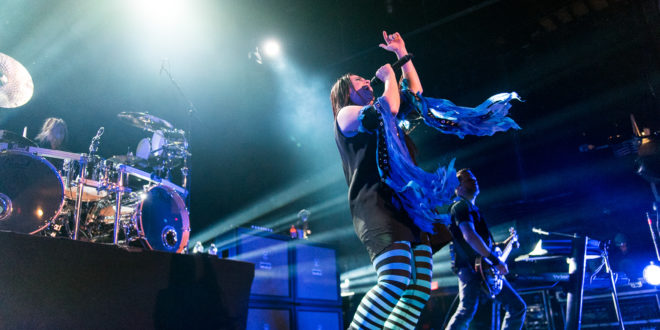 Gallery: Evanescence at The Wellmont Theater in Montclair, NJ 11.22.16

It’s been several years since Evanescence has ventured into a New Jersey venue, but from the way fans poured in from all over to sell-out Montclair’s Wellmont Theater, you wouldn’t even know it. It may have been dubbed a homecoming tour, but Evanescence’s successful return to the road proves that the band has never been far from their fan’s hearts and minds. Led by Amy Lee’s siren-like vocals, Evanescence played through a stunning 19-track setlist, including standout favorites like “Going Under,” “Your Star,” “Call Me When You’re Sober,” the chilling “Lithium,” “My Immortal” and a bonus encore of Michael Jackson’s “Dirty Diana.”

Evanescence wrapped up their North American tour last week at Huntington, NY. The band has been on the road in support of their upcoming vinyl box set The Ultimate Collection, out December 9th. More info on the 6-LP set here.

Check out some of the shots from the show below: