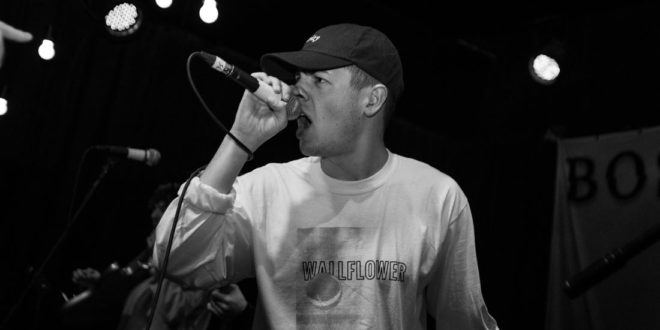 Don’t think there has ever been a time when I have gone to see a show in Audio in Glasgow and ever been disappointed, is small, sweaty and there’s no barricade. The support bands for Boston Manor tonight made it clear why they were an obvious choice for a night of incredible pop punk.

First up were London band Wallflower who, before they even stepped on stage, looked like a band you would see at one of these shows, their style just already capturing you. They best way I can describe Wallflower is if Moose Blood met Enter Shakari. They had that heavy music behind them but the vocals were that perfect blend of a little more hardcore and soft, mellow voices. The band have mastered creating a presence for themselves. Creating an incredible atmosphere within only a couple of songs. I feel like these guys are a band that everyone really need to appreciate because their fantastic music so easily captures you and after listening to them online before the show, to actually seeing them live is no comparison. Yes their music is fantastic on the internet but getting to hear and experience it live is a much different story. They weren’t much of a talkative band like some bands are but it worked for them. It gave off their moody and punky look they had. They didn’t need to speak at all. The music did all the talking for them.

Can’t Swim or as I like to call them, the nicest band in pop punk, absolutely blew me away. Not really knowing what to expect since I had only had a few listens to their debut record I was going in with a lot of optimism. We sat down with the band before the show and I have never met a nicer, funnier and kind band who were incredibly humble for the chances they have been given in music. The live set itself was something of beauty. For being such a new and emerging band it was so nice to see faces in the crowd who already knew their words, were wearing their merch and had obviously spent a long time waiting for their opportunity to see one of their favourite bands and those fans would not have been disappointed. Can’t Swim put on one of the most amazing and energetic performances, the minutes they removed their dad hats it’s like they were different people. These lovely polite boys we sat down with had gone and they were now just pop punk gods making this incredible music. I always believe it’s very special when a band who is playing a tiny venue can make you feel like you’re at a sold out show in the 02 in London. They just bring energy, atmosphere and a whole lot of love and that’s exactly what Can’t Swim did in Glasgow’s Audio.

Be Nothing for me has easily made 2016 album of the year. A change in sound but in no way a change of skill. Boston Manor have had a fantastic couple of years with EP releases. But their debut record has completely stolen their show. This album tour was truly a thing of beauty. The massive backdrop lining nearly the full length of the stage and lights hanging from the rigging in the venue. Setting an atmosphere that really reflected the bands change in sound. Now I have seen crowds go crazy before but I’m pretty certain I have never see quite this many crowd surfers at a show, especially in a venue that small and because there was no barrier there was even a fair amount of stage diving too. Watching a whole crowd jump, point and scream the lyrics to an incredible album is one of the best moments I think you can ever see in the music industry, seeing people just bond through their love for music. The setlist was so incredibly strong, it was like a perfect balance between the new album an classic Boston Manor tunes.

I’m sure you know yourself that there is always a few special points in a set where you are just totally blown away by the sheer incredibleness of the band in front of you. Bosto were incredible from the outset but their song “Copper” was one that just took my breath away (not just because I was being crushed by crowd surfers) because of how amazing it was. Every single time I’ve seen Boston Manor there hasn’t been a single time were they have not been on their A game, every single member giving as good as it gets and I will constantly stand by Henry’s little hip sways. Speaking to Henry and Dan before the show made me realise that no matter what venue they play no matter what country they are in, they are just so grateful to be out on stage, preforming for kids, weather it’s a handful of them or it’s a fully sold out huge show and it really come through on stage while they’re preforming because they put everything into it. During “Lakia”, one of the most incredible songs off the new album I took a step back from the crowd just to watch. Henry was right in the crowd, screaming the words with the crowd, that fan/band line being somewhat crossed. Like they were more than fans, like they were family.

But a Boston Manor show wouldn’t be a Boston Manor show without a couple of tunes form their EP Driftwood. It was at that moment, when they played “Driftwood” you realised the progression in their music. Don’t get me wrong the new album is one of the most incredible records I’ve heard but for those old school Boston Manor fans who have been seeing them since the early days, those songs are always going to be the craziest and rowdiest ones. With that, “Driftwood” and “Trapped Nerve” lived up to every single expectation for the most insane moment of that show, at a point I practically had crowd surfers sitting on my shoulders, I had bruises on my ribs and I was a mess but it was all worth it to watch this band preform. I strongly suggest that if you want a good night full of pop punk and and incredible atmosphere. A Boston Manor show is the way to go.

19 Years old from Glasgow Scotland, currently studying Radio at City of Glasgow College in conjunction with my own Youtube Channel!
@johnhughxs
Previous Interview with Henry and Dan of Boston Manor in Glasgow
Next Gallery: Helmet at Music Hall Of Williamsburg, Brooklyn, NY, 11/13/2016