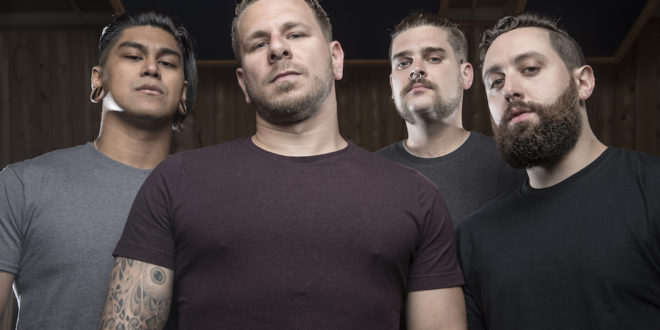 Massachusetts metal veterans WITHIN THE RUINS have debuted an all new song today titled “Death Of The Rockstar,” exclusively via Revolver Magazine. “Death of the Rockstar stems from our distaste for the current state of the music industry,” says guitarist Joe Cocchi. The track is the first bit of music the band has released off their forthcoming LP.  “The song is straight forward and speaks for itself. We live in an era where mindlessness and fads now trump true art and creativity. The music industry is polluted. Please enjoy.”

The new track is available on all major streaming services and will be offered as an iTunes instant gratification track. Fans who pre order the album today will get “Death Of  The Rockstar” immediately as a download.

The band is heading over to Europe with label mates Fit For An Autopsy, The Last Ten Seconds of Life and Phinehas. A tour poster can be seen below, click here for all tour dates.

Within The Ruins will release Halfway Human on Friday, March 3rd 2017 via Entertainment One (eOne) in North America and SPV overseas. The band recorded the new effort from their own studio with producer and guitar player Joe Cocchi at the helm. Vocal production took place at Zing studios in Westfield, MA with Jim Fogarty (Killswitch Engage, The Devil Wears Prada).

“The writing process was a bit different for this album,” says Cocchi. “We took a step back and kind of reviewed some of our older material. Typically we’d rush and blast out a group of songs and then hit the studio. At the time it felt right. And It had a more organic feel. Now because of a combination of maturity and honestly just feeling sick of the same old formula, we really focused on creating something different sounding.”

Halfway Human will be the band’s followup to the critically acclaimed Phenomena LP released in 2014 that had critics like METAL INJECTION call the album a “well refined album with more surprises than one would expect.”  Cocchi concludes, “We went back to a more organic style of writing and production. I personally was finally able to abandon a lot of my writing habits or ‘rules,’ if you will. No more ‘oh, that part doesn’t really sound like us, have to change that,’ type of bullshit. Doing that created a fresher sound. This is the most raw and extreme sounding material we’ve ever written. Keep an eye out for studio blogs and more updates.”

Within The Ruins maintain an emphasis on showmanship but with diversity, smartly sidestepping predictable structures and contrived breakdowns. Born and bred in the same heavy metal rich Northeast soil as New Wave Of American Heavy Metal progenitors Killswitch Engage, All That Remains, Unearth and Shadows Fall and weaned on the dark sounds of classic death metal, the technical melodicism of Scandinavia and the precision staccato crunch of Meshuggah, Within The Ruins have busted their collective ass to carve out a unique identity for themselves from those ingredients.

Within The Ruins are refreshingly authentic, feverishly committed and have proven that they will endure. Filled with power, deserving of utter respect, armed with concise compositions and technical might, Within The Ruins will not be stopped.

Within The Ruins Tour Dates