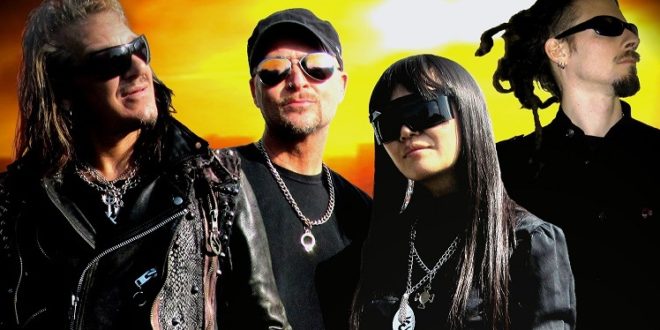 While we eagerly await new music to celebrate the 30th Anniversary of Industrial legends MY LIFE WITH THE THRILL KILL KULT, the Disco Demons are giving us a special Christmas present in the form of Sinister Whisperz II: The Interscope Years (1992-1996), a 13 track, remastered collection representing their 4 years on Interscope Records, including tracks from Sexplosion!, 13 Above The Night, and Hit & Run Holiday as well as a remix of their classic hit, “After The Flesh,” which they performed in the Cult Classic film The Crow.  The album will be available via the bands’s Sleazebox Records both digitally and CD on December 13.

Hailing from Chicago’s renowned Wax Trax Records stable of recording artists, MY LIFE WITH THE THRILL KILL KULT creators Groovie Mann (Franke Nardiello) and Buzz McCoy (Marston Daley) have been conjuring up sonic tales of sex, blasphemy and kitschy horror since 1987. Though often categorized as a pioneering industrial band along with label mates MINISTRY, KMFDM and FRONT 242, their true sound can be described more as a concoction of experimental, disco, rock, electronica and lounge, interlaced with their signature sampling of spoken dialogue largely taken from old B-movies. In fact, the original intent was to write and produce a trashy thriller film in the style of John Waters and Russ Meyers. Yet without much cinema experience and access to video equipment, the project was scrapped, only to be transformed into a musical group of the same name – something both had more expertise in. Nardiello fronted the late 70’s Chicago bands THE DT’S and SPECIAL AFFECT, as well as singing for the post-punk British outfit DROWNING CRAZE. Daley attended Berklee College Of Music, but quickly realized a formal education in jazz was not for him. He left school in 1981 to co-found the art-punk Boston group ZERO ZERO, and later the more goth-electronic oriented GODBOX before relocating to Chicago in 1987.

TKK’s debut album I See Good Spirits And I See Bad Spirits was released in 1989 and the next few years were spent touring extensively with an entourage of dubious musicians, shocking performance artists, and a back-up trio of voluptuous singers/dancers dubbed the BOMB GANG GIRLZ. The shows had a “Cabaret From Hell” vibe, arousing the curiosity of the kids and the media.

The band’s popularity among the underground club scene was fueled by hard-hitting dance tracks with titles like “Kooler Than Jesus”, “Do You Fear For Your Child”, “A Girl Doesn’t Get Killed By A Make-Believe Lover Cuz It’s Hot” (featuring punk poet chanteuse LYDIA LUNCH), and “A Daisy Chain 4 Satan”. The Parents Music Resource Center (PMRC) was appalled.

Their third album Sexplosion! (1991) spawned the chart-topping, radio savvy song “Sex On Wheelz” which quickly caught the attention of the major labels, and the band signed to Interscope Records in 1992. Like all of their releases, the album had an overpowering cinematic quality, so it wasn’t surprising when Hollywood also took notice. They found themselves writing for an assortment of soundtracks like Paul Verhoeven’s SHOWGIRLS and animator Ralph Bakshi’s COOL WORLD. The video to their 1993 single “Blue Buddha” was prominently featured in MTV’s classic series BEAVIS AND BUTTHEAD. In 1994, they stepped in front of the camera for a cameo in the cult classic THE CROW to perform the song “After The Flesh”. More recently THRILL KILL KULT was written into the story line of the 2013 film SEXY EVIL GENIUS starring Seth Green, Katee Sackoff and William Baldwin. Their music can be heard frequently in movies, television and cable shows, such as HBO’s long running, REAL SEX series, Showtime’s CALIFORNICATION and most recently in the indie flick CRAZY EYES.

MY LIFE WITH THE THRILL KILL KULT’S sound has always been fearlessly experimental, and has been directly credited for influencing many of today’s artists from MARILYN MANSON to the SCISSOR SISTERS. The group continues to morph and stretch the fabric of music and as we know it, changing styles and exploring new sonic avenues with each new album, yet always remaining true to the KULT and true innovators.