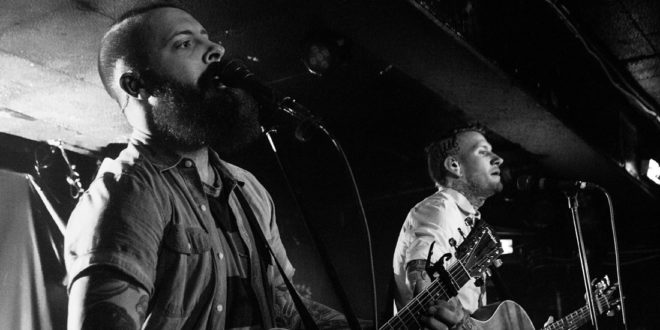 A chilled out show, acoustic vibes, the setting of Glasgow King Tuts. One if my most favourite bands headlining, I knew I was going to have a lot of fun. First up was a little acoustic set from local support Andy Cannon, singer in Glasgow band ‘Talk‘. The only support for the evening. Despite the nerves of his first ever solo acoustic set he was amazing.

After the nerves left he really going into the swing of things, with a powerful voice and incredibly strong songs Andy made a perfect edition to the line up. His acoustic vibes set up perfectly for This Wild Life and he was even joined by another band mate at one point in his set, who sung a beautiful, touching song about his late father. The whole crowd were in a hushed silence just listening to how much passion and love he put into the song. Seeing the two of them preform really made me want to check out one of their full band sets.

This Wild Life, every time I see them, never fail to put on an incredible show (even with the later knowledge Kevin Jordan was suffering from food poisoning) and I couldn’t wait to experience it all again. I will never get tired of hearing them live, they just send out the most incredible and loving vibes to their crowd. Kicking off the set with a song from brand new album Low Tides it was evident how dedicated the audience was. Every single word being sang back to the band. I think no matter what your genre of music is every can appreciate The Wild Life because they give 110% when preforming and thought their set there were songs that were so notable and so stand out that they left such an impression. First was “History” from the bands last album Clouded. Dawning their guitars, Kevin and Anthony blew the crowd away with it, being one of my favourite songs I couldn’t help but sing along and just feel so at one with the band.

Something special about the band for me is the ability to share about their life and reflect their struggles, hard time and happy times in their music and for a lot of people, the speech Kevin gave before playing “Pink Tie” from their EP Heartflip was the kind of speech that so many people could relate to: a father leaving; being raised by a single mother and falling into the wrong crowd. They just had this way of story telling through their music and it’s the most pure and beautiful thing. For anyone who has seen TWL before they will know that before their song “No More Bad Days”, Kevin always give a speech about his mother being ill and the struggles they faced but last night, he gave that same speech again but addressed the crowd, telling them that if they had family members with illness’ or friends who were down and out on their luck or someone who just needed a friend, to help them. Show them it’ll get better. The reaction was incredible. I can guarantee there wasn’t a dry eye in the house (including myself) but I find it so heartwarming that their music, although written from their perspective can mean so much in so many different ways to other people.

An interesting thing TWL did as well as they got the whole audience to stay silent during new track “Just Yesterday” and never before have I heard this type of silence at a gig. You could hear a pin drop as the calm and quiet just washed over the crowd. It was truly spine tingling an I doubt many people could manage that. I just cannot get over how incredible this band are an proved themselves to be even more, preforming a live version of their viral cover of Bring Me The Horizon’s “Sleepwalking”. I don’t think I have loved a cover version more than the original than I do with this because it is just so different. This was part of the ‘encore’ as Kevin informed us, they aren’t that kind of band “It’s too cheesy so we are gonna just tell you we have three songs left” which is a great way to do it. None of the dramatics. But for the last two songs we saw Anthony take on the drums for “Concrete” and “Falling Down” and that versatility was so amazing to watch as their guitar tech stood on the barrier and let a sea of balloons rain over the crowd. Two containing golden tickets for a couple of lucky people to receive a singed copy of the album.

I just can’t even imagine missing an opportunity to see This Wild Life. They are a phenomenal band and make an incredibly big sound for there only being two of them. I can honestly say that last night was very high in the list of my favourite ever shows.

19 Years old from Glasgow Scotland, currently studying Radio at City of Glasgow College in conjunction with my own Youtube Channel!
@johnhughxs
Previous Gallery: This Wild Life at King Tut’s in Glasgow, 16.11.16
Next Show Review: Alter Bridge at Razzmatazz in Barcelona, Spain 05.11.16