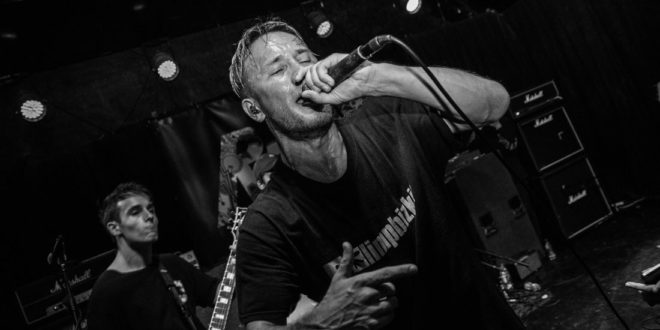 Columbus, an incredible young three piece from Australia. Dawning incredible smiles through their whole high energy performance. A long way from home they just made everyone feel like they belonged at a Columbus show. It was a perfect start to one of the most pop punk shows. The was the most incredible amount of energy and excitement through the whole set. There were a couple of those die hard fans in going absolutely crazy for them. They have some amazing songs and they are a band that I would for sure go to see again because in such a tiny venue I would love to experience a headline just full of their fans.

We spoke to Jordan Black from Like Pacific before the show an he promised for things to get crazy and it did. Their music being a perfect and mix of that crazy pop punk to mental pits, crowdsurfing and some serious stage diving. Same as Columbus Like Pacific had a handful of dudes down the front, right up with Jordan, screaming into his mic at every opportunity and just absolutely loving life. The whole dynamic of Like Pacific was incredible, after the release of their debut album Distant Like You Asked earlier this year they’ve taken things by storm in the most incredible way. Things took a emotional turn when we hear a song that was written about Jordan’s grandmother and it was so beautiful and full of emotion. If you have the opportunity to see them. Take it.

“Bonjour. Aujourd’hui dans notre programme nous allons parler de la nouvelle révolution musicale dont tout le monde parle. B-b-brand new banger. Exclusive hot new mix. Hahaha thanks for tuning in. Next up, hailing all the way from the south of the UK. You asked for it, ROAM.” Hearing this intro will always spark up the interest of everyone in the room. People can never underestimate the energy of this band. Costello stepping out, actually more like jumping out. He was like an excited little puppy jumping about the stage and just being so excited to be there. First up was first song of the new record Backbone, “Cabin Fever” and it was an instant surge of the crowd, fingers in the air and a pit had opened up. Never before have I seen a crowd go so wild just within the first song. The venue may not have been packed but every single person was making use of the space and having the most incredible time. What I loved most about roam and their setlist was that they didn’t limit themselves to the new album like a lot of people do on a release tour. They switched it up, playing songs from the album and old EP’s. They listened to their fans and played what the wanted to hear. Songs as “Sticker Slap”. An absolute Roam classic, to which the room went crazy showing that Scotland has some original Roam fans from way back when they first supported Neck Deep in 2013.

Glasgow obvious has it’s rowdy reputation and following some banter with the crowd they actually had to tell them to “shut the fuck up” so they could slow things down and play the very emotional “Tracks” it truly was such a beautiful moment to behold. Such a perfect song written about the incredibly poignant subject of long distance. This was the first time I had witnessed the song live and while it’s usually an acoustic track, seeing it full band was almost like a religious experience but though the crowd slowed down for that one song that did not stop them getting absolutely crazy. I love Roam so much and love the venue the played in, small capacity, hot and sweaty, no barrier and a bunch of incredible pop punk kids who just loved to be surrounded by good music and good people. As well as being incredible musicians the boys in Roam and incredible people and they are the sweetest and we had the pleasure to speak to them before their show.

19 Years old from Glasgow Scotland, currently studying Radio at City of Glasgow College in conjunction with my own Youtube Channel!
@johnhughxs
Previous Interview with Roam in Glasgow, 17.11.16
Next Album Review: Brine – Kill the Ill