Home / Photography / Show Review and Gallery: Combichrist in Brooklyn, NY at the Knitting Factory on 10/13/2016 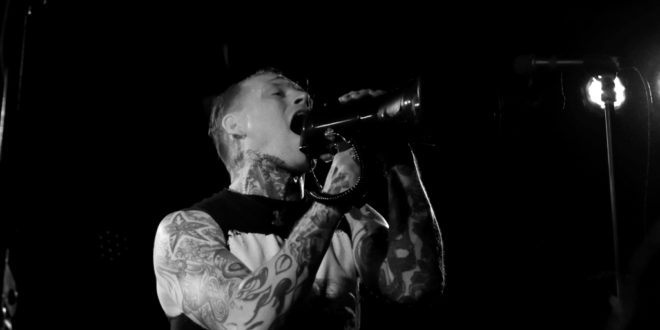 Show Review and Gallery: Combichrist in Brooklyn, NY at the Knitting Factory on 10/13/2016

Combichrist recently concluded a multi-city US fall tour. On October 13, their route had a stop in Brooklyn, New York at the Knitting Factory. New York natives Panzie and California-based All Hail The Yeti were the supporting acts for the night. Each of these bands demonstrated high levels of enthusiasm, prepping the audience in attendance for the headliner of the night. Once Combichrist hit the stage all of those present were in for one heck of a fun and exhilarating performance.

The setlist started with the song ‘Slakt’, an intense and charged track off their most recent release, This Is Where Death Begins. Combichrist was gearing up to give the fans present everything in their arsenal, guaranteeing a great night mixing older favorites while promoting the newer songs.

The energy shared among the members of the band was incredibly fun to observe. They never allowed a dull moment between them. Everyone on that stage put on such a great performance, leaving all in attendance extremely gratified. I walked into the venue as an occasional listener of Combichrist and walked out a fan. So much so, that I took the opportunity to see them the following night in Philly where once again, they delivered with the same level of unrelenting intensity.

To learn more about Combichrist check them out at:

Concert lover, music fanatic. If it sounds good to me, the rest doesn't matter.
@njaziaddict
Previous Chasing Safety Release Official Music Video for “This Is Hell”
Next Bringing The Underground Back To Scene: biskuwi – ardent