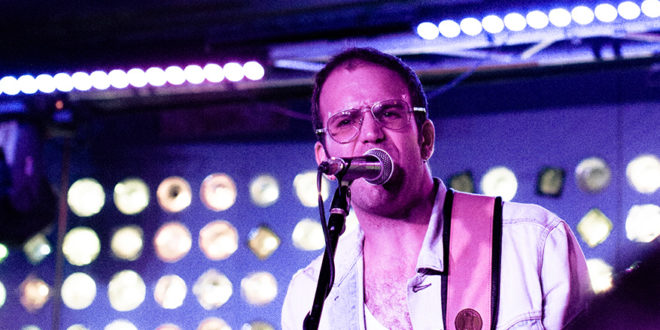 Theo Katzman has a new album coming out in January 2017 and we got to hear a live preview of it last Sunday in Brooklyn, New York! If I weren’t already excited for the new album, hearing the songs off of it just made me that much more anxious for January. He and Joey Dosik played to a sold out crowd at Baby’s All Right.  Theo and Joey took turns singing songs while their friends, Julian Allen and Joe Dart, joined them on drums and bass.

Theo’s new songs are a collection of folky pop that talk about heartbreak in all its different forms. Some songs are slow and sad and others are upbeat and pop-rocky. My personal favorite is “As the Romans Do,” which includes the “world’s easiest audience sing along” where the crowd yells “DO!”.

For fans of Theo’s other project, Vulfpeck, this album is not funk, but it does a great job showcasing Theo’s amazing tenor vocals, so you should definitely check it out. And Joe Dart plays bass on it, so there’s that.

Joey’s album, Game Winner, is out now. You can get it here.

Theo’s album, Heartbreak Hits, is coming out January 6, but you can pre-order it off of his Kickstarter now. Here’s the link.

Fun Loving Music Photographer and lover of live music in general. I am most likely to be spotted with a coffee in one hand and a camera in the other, somewhere in Philadelphia, New York City and everywhere in between. For more of my music photos: http://myphotos.bellemorephotography.com/
@bellemorephoto
Previous Show Review: Alter Bridge at Razzmatazz in Barcelona, Spain 05.11.16
Next Gallery: Dua Lipa at Terminal 5 in New York City 11/15/16