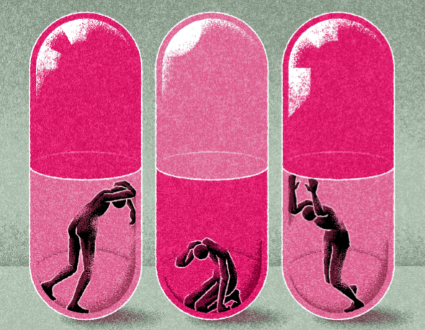 Post-punk revival band, Brine, have jumped onto the music scene with their full length debut, Kill the Ill. While their roots remain heavily in post-punk, Brine have developed a project that combines a hefty amount of influences throughout its productions, which is sure to please a wide variety of listeners. While the talent is here, the big question is whether or not Brine are able to not just appeal to those nostalgic for the echoed sound of 1980’s rock, but to also put forth a style that is uniquely their own.

The album opens on a strong note with the title track, which features a distorted guitar riff that is almost reminiscent of the surf rock style that was prominent in the 1960’s. The riff mixes in well with the backing rhythm section. The leading instrumentals transition back and forth well with vocalist Daniel Keating, who has a voice that sounds like a blend of Ben Weasel from Screeching Weasel and Greg Graffin of Bad Religion. His voice has a nice punk edge but isn’t too scratchy to make it feel out of place with the cleaner production that the album carries. Other tracks like “Rats Asleep” and “Asylum” feature this classic post-punk sound but aren’t afraid to add in some unpredictable choices for instruments, such as the use of saxophone in certain areas. These songs also carry a smooth aesthetic to them though they never feel too glossy or overproduced. The tight instrumentals pairing well with Keating’s calming vocals actually give this album a remembrance of the early work of HIM, believe it or not. While Brine are not nearly as theatrical as the Ville Vallo-fronted gothic rock band, their dramatic songwriting and slightly melancholy presentation give the two groups more similarities than one might think.

Track 4, “Asylum,” has a similar style that was mentioned in the previous tracks, though it carries a sound that is reminiscent of the early post-punk acts such as Joy Division, which will please fans of that era, though the band never feels like it’s playing too heavily into the nostalgia factor to the point of exploitation. Brine takes influences from these artists, though they have enough originality to make them stand on their own feet. With that in mind, this is just scratching the surface of the influences found on this album. Track 6, “Tommy,” sounds like it could easily fit into Tim, one of the best Replacements records. Track 7, “Evangelist” takes a grittier approach that shows more of the band’s traditional punk style, similar to the Bad Religion comparison earlier, though it also draws similarities to newer punk acts such as Iceage. The ninth track, “New Year,” carries a somber tone, a style that is quite familiar with the post-punk genre. With its somewhat baroque piano intro and overtly dark lyrics, this track doesn’t hide from being a more grim moment on the record. These grave tones continue on the final track, “Mutiny.” This track sounds familiar to something that could be found on Husker Du’s Candy Apple Grey, a notoriously sadder approach for that band. This is the darkest moment on the entire album thanks to its almost shoegaze exterior. With hauntingly layered instrumentals and vocals that sound as if they are pleading to the listener, “Mutiny” is arguably the brightest moment on Kill the Ill and it truly proves how well the band can work together.

The main drawback of this record is that even with all of its varied influences, it’s still a fairly straightforward post-punk record in most cases. This might not be as much of a hindrance for the fans of the genre, though it could also lead some to criticize it for not offering too many new characteristic with their approach. However, even though Brine might take a somewhat safe direction with their first release, it’s still an impressive achievement for a band that is just getting started.

Kill the Ill offers a nice dose of post-punk that is sure to be an enjoyable experience for fans of this style. Brine have done a nice job of proving their skills as musicians here and while this record is a good indication that they have potential, it’s up to them to take it from here and eventually craft themselves as not just a band that reminds listeners of earlier post-punk groups. This album will likely be a nice launching pad for the band to elevate themselves and find their own niche along the way.

Cain Miller is an aspiring writer who hopes to work his way up and gain notoriety for his material. Having written about film, television, music, and sports, Cain is always looking to gain as much experience as he can and continue to improve his writing abilities.
@cainemiller
Previous Show Review: Roam at Audio in Glasgow, 17.11.16
Next Thrill Kill Kult Announce December Release for ‘Sinister Whisperz II: The Interscope Years (1992-1996)’