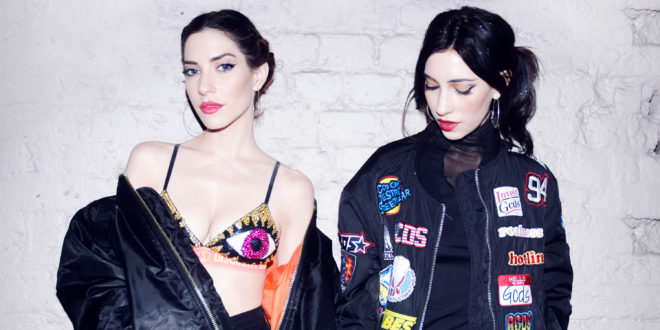 “I remember sitting in a London hotel room listening to some of the girls’ new music casually playing as we spoke about their new album,” remembers Ruby Rose about her instant attraction to the song. “When ‘On Your Side’ came on, I stopped in my tracks and asked them to replay it… and replay it.”

“Ruby Rose is known for creating powerful and intensely affecting work and being given the opportunity to collaborate with her artistic force has been an incredible experience, both personally and professionally,” adds Jessica Origliasso. “Lisa [Origliasso, other half of The Veronicas and Jessica’s twin sister] and I have always been drawn to unconventional and honest story telling through our music; Ruby brought this to the forefront in our video for ‘On Your Side’.”

Quote from RUBY ROSE:
“When I first heard the song I was drawn to the lyrics. Some songs tell the first chapter of a story others only tell the last, but here I was listening to a full narrative of someone’s sincere experience with love. It stood out to me and, like any great narrative, you wanted to know what was going to happen next.

Some months later when the girls spoke about making a video, it occurred to me they had never done an entirely narrative-based video… one without the use of singing to camera. I felt compelled to write a short film for it and see what they thought.

They loved the idea of it and asked if I wanted to be in it. A few days later, we shot it over a weekend in Auckland. The only thing is I threw out the original concept for the short film the night before shooting when I realized how many times they had used cars in previous videos. I wrote the treatment for what stands as the video today as an 11th hour revision.

As both a director and an actor, it was great to work with Jessica. I was blown away by what a naturally-gifted actor she is.”

Quote from JESSICA ORIGLIASSO, The Veronicas:
“The video shares a story between Ruby’s character and mine. It’s a true-to-life look at the passion and protection of two people falling in love and, ultimately, a love that cannot be broken.

Working with Ruby – someone who naturally aligns with and embraces powerful and impassioned narrative – was an organic step forward for The Veronicas and an inspiring and rewarding experience for everyone involved.”

‘On Your Side’ was written and recorded in London with UK pop gurus Wayne Hector (One Direction’s ‘Steal My Girl’, Nicki Minaj’s ‘Starships’) and Jim Eliot (Kylie Minogue’s ‘All The Lovers’ and ‘Two Hearts’, Ellie Goulding’s ‘Anything Can Happen’) and produced by up and coming Swedish whiz-kid Ollipop.

The sisters are putting the finishing touches on their fourth studio album, which has a “heavy Euro electro pop” feel. They’ve had the luxury of working on the record while “In My Blood” continues to be one of the biggest singles of the year in Australia, as well as making inroads in the UK, US and Asia.

“Every other time we’ve released a new single the album has already been finished,” Jess says. “So to have a #1 single as a motivation is amazing. It never gets easier releasing music, you never know if people will like it but to know people really connected with ‘In My Blood’ was mind-blowing. It’s given us a real perspective on how to finish this record.”

‘On Your Side’ is the second single to be lifted from The Veronicas forthcoming album, set for release in 2017.

Tags Music Video On Your Side Ruby Rose The Veronicas