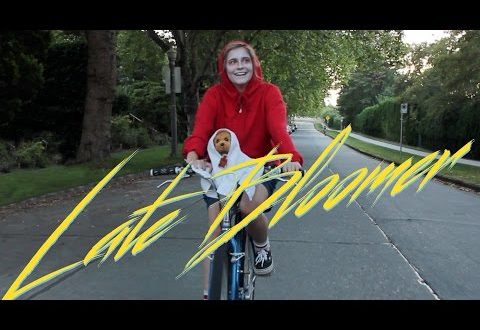 Youtube content creator and musician Haley Blais has just released her EP Late Bloomer and it’s a personal three song record that speaks to anyone who has ever felt alone, depressed, or that they weren’t as “adult” as everyone else.

The album opens with “Good Feeling” which is about waiting and wanting to feel better when all you want to do is hide your head and escape to the comfort of your bed. “Happiness is fine and yet I seem to forget it unless I’ve smoked it, “ Blais sings mournfully in a hazy, almost drowsy vocal performance, her tunes not just something to be listened to but something to experience. It has a bit of an upbeat swing when the chorus rolls around which is extremely appealing, as Blais sings about repressed feelings and exhibiting signs of depression. It is hopeful in an honest way and one of Blais strongest attributes as a songwriter is her ability to be real with an audience, not looking for pity, but instead just spewing out her emotions in a way that will connect and resonate with so many.

“Mine” is a very short track that doesn’t have many lyrics, and relies heavily on repetition but with Blais controlling all the musical strings it all works. “If dogs have one life cats have nine.If my dog needed one life I would give him mine,” Blais sings tapping into an untapped market. Almost everyone can relate to loving and losing a household pet and Blais puts that unconditional love into a ballad that is sweet but never saccharine. It will strike a chord with many of her listeners, and in her lo-fi sound she manages to come across as both somber and still hopeful, a sort of complicated feeling that stick with listeners . The repetition comes off as purposeful, Blais hammering into her audience the love and devotion one feels for their pet, who is more than just a pet. It’s impossible not to fall in love with Blais as she expertly puts into song so much of what humans are feeling.

The closing track “Late Bloomer” is full of magic, and is one of the best songs of 2016. It has a light and playful instrumentation but Blais’ words and voice bring a lonely vibe to the tune. “Oh I’m so tired of being lonely but I also don’t care,” she croons wearing her heart and life on her sleeve, not afraid to tell the world that she is a late bloomer. It speaks to anyone who has ever felt they were behind in life compared to their peers and are teetering on the brink of adulthood, but not ready to cross that line just yet. Feelings of depression are addressed here and Blais conveys these emotions so well that her personal story becomes a universal one, and is an anthem to late bloomers everywhere. The chorus boasts some creative lyrics that really help sell the song “I’m a late bloomer. You’ll never see me in the spring. I hesitate to my pruner cause I’m scared of ever blossoming.” It is meaningful and one of those rare songs that is more than just a tune, but something that is much bigger and gives a voice to so many people who feel lost. Plus did I mention there is an under layer of Madonna’s hit “Like a Prayer?” heard throughout parts of the song adding a whole different dimension to the track?

Blais is a songstress to keep your eye on, because she is vocal piece for anyone who cannot put into their own words what they are experiencing.