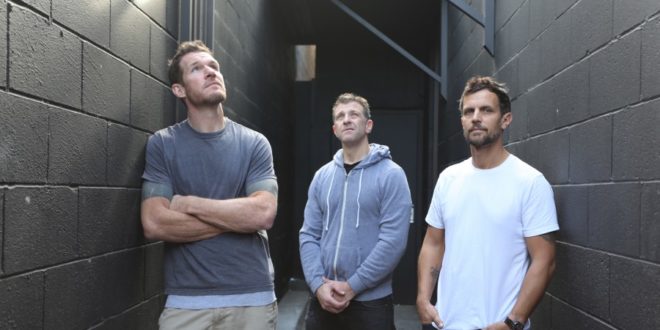 What a wild ride 2016 has been, and that’s putting it mildly. From the political affairs of America to Brexit, various events have put many parts of the world into a state of turmoil that toes the line of chaos. In this unrest comes Wakrat’s self-titled debut album. Quite possibly this year’s most unapologetic, uncensored, and outspoken punk record will be released in the US digitally on Election Day, November 8th, and world-wide physically on November 11th.

Wakrat is Tim Commerford (Rage Against The Machine, Prophets of Rage) who fronts the trio on vocals and bass, along with Laurent Grangeon on guitar and vocals and band namesake Mathias Wakrat on drums. The three officially formed in 2015, and have already garnered a rather large following on social media. Due in large part to the #generationfucked movement on Twitter (named for the album’s lead single), the band established The Republic of Wakrat, claiming Parliament Square in London as their own sovereign state. The event took place during an audacious protest designed to expose the failings of the UK’s current political system.

Quick cymbal taps open up the album with “Sober Addiction.” This deeply angry track has a sort of Fight Club feel to it, and I can hear Tyler Durden in the back of my mind saying “The things you own end up owning you.” This song contains a lot of chaos and confusion in the way the band jumps time signatures which had me hooked and wondering where they were going.

Wakrat forces my attention to the darker side of war in “The Number.” Commerford’s rapid bass lines set the pace as his lyrics highlight the countless soldiers that have given their lives in conflicts with several different countries. He quite bluntly states “It always happens in America, eat more, waste more, fake more, make more war, war, war, war,” and I find it impossible to disagree with him.

The aforementioned lead single “Generation Fucked” takes all the anger and angst of the millennials and compresses it into a 3:32 song. Commerford spits out the lyrics with such intense venom that makes this an anthem of the times. But it’s that true early 90’s punk sound that really makes this track stand out from the rest on the album. However, all that rage doesn’t go much of anywhere. “Generation Fucked” comes across as an emotional dump without a purpose.

For those that need a little brushing up on their French, “La Liberté ou la Mort” means “liberty or death,” an obvious nod to Patrick Henry’s 1775 speech. The track itself is bit slower and grittier than the rest of the album, but only just barely. Even as the lyrics swing between extremes, singing lines like “cannibalize, we criticize,” Commerford plays on the figurative blindness of the population that began in the previous track, “Nail in the Snail.” The duality is even in the melody, loud and powerful during the main verses and the chorus, and falling away entirely as he quietly sings “Tell me everything, I wanna know everything.”

The raging beat and chaotic riffs in “The Thing” are overshadowed by “Knucklehead,” mainly due in part to the angry, repetitive lyrics. “The Thing” is mindless in its anger, whereas the thrashing “Knucklehead” has a clear focus on the feeling of being “locked in my aquarium.” Commerford’s delivery really captures the desperation to find a way out, be it by a gun or knife, and his angst-filled scream at the end is a fantastic release of emotions.

Expeditiously closing out the album are “New Clear” and “Pigs in a Blanket.” These two songs represent some of the best of the album by filling in what each one lacks. The former is a highly explosive track that features the fullest, and most well-rounded sound on the album capped off with a mesmerizing guitar solo by Grangeon. “Pigs in a Blanket” takes all the anger on this album and summarizes it in just under 4 minutes. It doesn’t quite stand up to the fuller melody of “New Clear,” as it goes back to the same chaotic riffs that open up the record. On the other hand, it does deliver the unapologetic and uncensored lyrics I was promised in spades.

Wakrat’s debut album comes at the perfect time amid political unrest in the US, containing track after track of high-energy angst and anger that barrels through like a runaway train. A lot of that rage goes nowhere, but some of these songs do have purpose and weight behind the emotions. However, I would have liked a slower track for a chance to catch my breath, so to speak. But political rage-punk has no time to stick around, what with the variety of topics to choose from lately. To jump on this train, pre-order the album via Earache Records or iTunes, check out the singles on Spotify, or watch the video for “Generation Fucked” below. If you’re also inclined to take action, go to the Republic of Wakrat to join the movement.

Previous Bullet for My Valentine Release New Single: “Don’t Need You”
Next Gallery: K. Flay at The Firebird in St. Louis, MO on 11.06.16