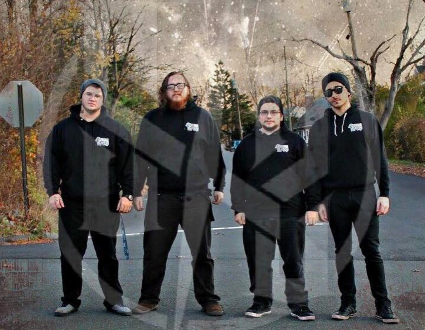 With their self-titled full length debut making its mark last year, progressive metal quartet Sirens Over Sumeria have made a quick return with the EP Omelas. The band’s debut was impressively ambitious and offered a substantial amount of promise for their future. With Sirens of Sumeria making such a quick turnaround to release new material, one had to wonder how well the final project would turn out, though Omelas is a solid addition to the band’s admittedly small discography.

The title track starts off with nice, crunchy vocals which pair well with sharp guitar work. As the track progresses, the band does an impressive job of transitioning between the deeper vocals, higher screeches, and actual clean falsetto singing which is somewhat similar to Claudio Sanchez of Coheed & Cambria. This opener follows a noticeably standard metalcore formula consisting of thunderous riffs and a wide array of vocals, though the band definitely performs quite well and gives listeners a good idea as to how skilled they are as musicians. Track 2, “The Swallow,” opens with some of the band’s notorious video game-inspired musicianship and while this moment might throw off some listeners given its difference compared to the previous song, it gradually eases into a more accessible moment. This track actually gets fairly catchy as it speeds along and feels like something that fans of different eras of metal can all enjoy. “The Swallow” features enough classic metal roots to appeal to fans of older, more classic metal while also contributing newer leaps of faith that allow it to reach followers of the newer stages of heavy music as well.

The third track, “Culprit,” has more of a harcore touch thanks to its repetitive nature. It could be compared to something along the lines of The Dillinger Escape Plan or Converge in certain parts. The EP continues down this brutal path with “Price of Prosperity,” which features some nice piercing guitars and vocals that are similar to the likes of Lamb of God. These tracks show how heavy Sirens Over Sumeria can get while still remaining catchy and rhythmic. “Culprit” and “Price of Prosperity” do a nice job of building up to track 5, “Solstice.” This track was a great choice for the EP’s first single since it showcases the many facets of talent that the band holds. The intro riff is incredibly playful, a slight contrast compared to what the band has put forth previously on the EP, but that style works well with this track. With the biggest proportion of clean vocals on a singular song on the EP, “Solstice” ends on a note that’s a bit different than what was offered earlier on the project. The track definitely has more a modern metalcore feel to it and this shifting between styles shows how well versed the band is and how easily they can switch between metal subgenres.

Omelas might not offer many different elements than what was shown on Sirens Over Sumeria’s last record, but that isn’t to say that the group aren’t building an impressive discography. Omelas is short and sweet, and while it’s run time doesn’t allow for it to overly expand on its progressive potential, it still makes for a good listen that will satisfy one’s metal fix. It will be interesting to see how the band will choose to increase their prog aspects when they decide to make another full length album. Needless to say, Sirens Over Sumeria have the potential to keep expanding on their sound and possibly look to experiment with other facets of metal in the future. Sirens Over Sumeria are a promising metal act and if they continue to put out quality releases like their first two so far, then their name will only grow from here on out.

You can find Sirens Over Sumeria on Facebook here.

Cain Miller is an aspiring writer who hopes to work his way up and gain notoriety for his material. Having written about film, television, music, and sports, Cain is always looking to gain as much experience as he can and continue to improve his writing abilities.
@cainemiller
Previous Gallery: Sixx: AM at T-Mobile Arena in Las Vegas, NV on 10.28.16
Next Australia’s DUNE RATS and DZ DEATHRAYS announce local tour support for fall co-headline tour