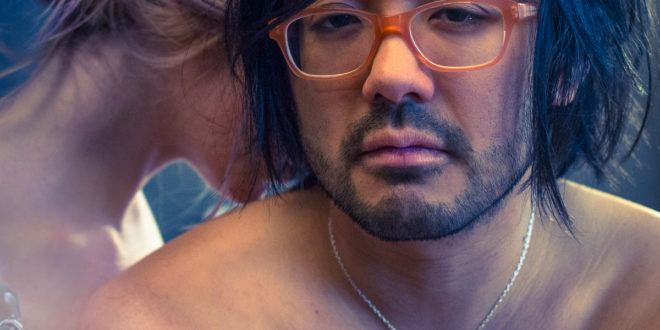 Albis, aka Rodriguez, is an accomplished musician who writes, produces, and composes his own pieces of musical art. Recently the man himself behind Albis spoke with musicexistence about his new EP Animals, the punk rock DIY scene, moving to New York, and touring with A Great Big World, among other topics.

1. You moved from Rhode Island to New York in 1999, what was the decision behind the big move?
That’s written about me and my band Nakatomi Plaza in the All Music Guide but it’s incorrect.  I moved to NYC to attend the Jazz Guitar program at NYU in 1997.  Nakatomi’s first record was recorded in RI in 1999 which I think is where this misconception began.
2.What was the recording process for Animals like? Was it different from any previous recording experiences?
Animals was recorded piece by piece and track by track.  The first album Smoke & Ghosts was recorded pretty much live.  I enjoy both types of the recording process, but I want to try to do the next record as live as possible.   I like switching it up.  Both methods have their advantages and limitations, and therefore inform the production in very different ways.
3. What is it about the DIY punk scene that speaks to you as a person and musician when you first moved?
I just connected with everyone’s ambition and drive.  And I don’t mean to be famous rockstars.  I mean that people in the DIY scene seem to be very focused on their craft whether they play for 10 people in a basement or 1000 in a club.  I also connected with the scene’s desire for community, which is something I longed for when I was growing up.
4. What was the experience like touring with A Great Big World?
Incredible.  I am so grateful to be touring with them.  After 10 years of playing basements and sleeping on people’s living room floors and crossing the country many times over in broken down vans, it was nice to get a taste of the rockstar life.  I love touring in a bus, I love sleeping in the bus bunks, and I love playing in front of 1000s of people all over the world.
5. What is it like performing with Hedwig and the Angry Inch?
Again, pretty incredible.  I think it’s a huge landmark for any musician to play a Broadway show, and this show featured the band in costume and onstage!  I love the songs in the show and it satisfied many rockstar dreams for me (playing in blue eye liner with skin tight pink leopard print pants and silver boots, playing a Gibson double-neck, etc).  One thing I really appreciate about both A Great Big World and Hedwig are the messages of love and acceptance, and I view both as an extension of the songs and messages my bands were trying to spread on those DIY tours.
6. How does this new album differ from your past releases?
My previous bands (De La Hoya, Nakatomi Plaza, Ghost Robot Ninja Bear) were both loud, heavy, and punk to varying degrees.  And the first Albis album Smoke & Ghosts has a bunch of rockers on there too.  But Animals is an acoustic affair, start to finish.  Animals also touches on some lyrical themes (jealousy, polyamory, etc) that I haven’t written about before.
7. What is the most stereotypical “rock n’ roll” thing you’ve ever done?
Cranked up “Take It To The Limit” as the tour bus was heading down the highway.  I had a sense that I had finally “arrived” to rock n roll.
8. Favorite album of 2016 thus far?
We’re All Gonna Die by Dawes.
9. Parting words to your fans?
I appreciate you all checking out my music!  And here’s a shout out to everyone that’s been following me over the years through all the different bands;  I really appreciate your support!
–Many thanks to Albis for the interview. You can check him out November 6th 2016 at the International Pop Overthrow–
https://itunes.apple.com/us/artist/albis/id896186926?app=music&ign-mpt=uo%3D4

Rare Americans is a Vancouver, British Columbia collective on the rise. Formed in 2018 by …