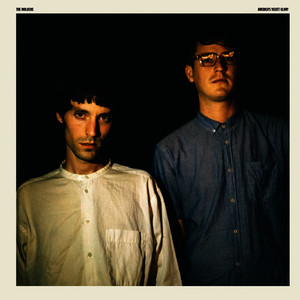 The Molochs album America’s Velvet Glory won’t be released until January of 2017, and while that may seem like a while away, it will certainly be worth the wait for listeners who enjoy garage rock and rock n’ roll in general.

“No Control” opens with a fierce instrumentation that has hints of The Living Statues to it, that raw energy bursting onto the surface in the first few notes. “I sit inside my room and think of all the things I lack/I think of all the people that won’t come back,” Lucas Fitzsimmons sings in a rock/pop/punk style that is undeniably infectious and morose at the same time and that is the magic of the song, as Fitzsimmons come to the realizations that he has no control . There is a lot of attitude here in the vocal delivery, sometimes at almost a slow talking pace, and it mixes clean production with more dirty lyrics in a way that is absolutely explosive. The chorus here is very simple, just repeating one phrase over and over again but it is that kind of stripped construction of the song that gives it a slight punk flavor, one getting the feeling Fitzsimmons simultaneously does and doesn’t care, full of swagger.

Halfway through the LP “The One I Love” comes into bloom and it is one of the best tunes to be found from the band. It’s sweet without ever being too sugary with lyrics such as “I will pour the water on your heart to grow” and “there are many things I’d like to do/and if you wanna I can do them with you.” There’s a Beatles crossed with Buddy Holly feel, The Molochs really playing up the retro aspect that so many of their songs contain and one can’t help but have a big grin on their faces at the commitment level the band brings to melding 60s sounds with a more modern day edge. There’s a jangle to the instrumentation here, very “Ticket to Ride” by The Beatles, that helps carry the song along at a brisk pace. And like so many of The Beatles hits “The One I Love” clocks in at under three minutes proving that a band or musician doesn’t need long drawn out tunes to create a song that is memorable and has substance.

“No More Cryin’” is the lead single off of America’s Velvet Glory and right from the first few seconds it is easy to see why. It’s like the best of The Monkees/The Strypes/Jeremy and the Harlequins mixed together to form a song that encapsulates the rock n’ roll of the 60s with a 2017 touch of magic. But it also feels authentically retro and could be mistake for a tune from years long gone by and that is part of the appeal of this particular song. Once again the chorus consists of a repeated phrase but it is so catchy and invigorating that one can overlook the simplicity and instead celebrate it because it is that construction that made so many songs of the past so successful. It’s easy to listen to and is bound to get stuck in ones head in the best way possible, and did we mention there is a killer instrumental solo? Be glad that you can purchase the single now to keep you going until the LP drops.

There are a few small places where the record could be improved especially on the more psychedelic inspired songs that drag on just a bit too much and on “New York” where Fitzsimmons talking delivery just doesn’t sell the tune. But other than that it is a fine release and will be a great way to kick of 2017.