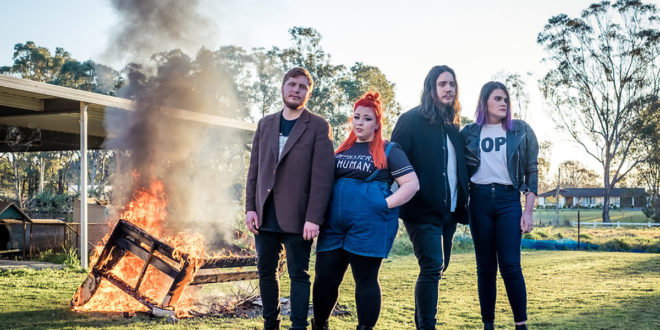 The Last Exposure releases their brand new single and music video “Human”, following the success of their debut Echo, “Human” is an uplifting song about not feeling as though one belongs in their body and does not in fact feel human. The Last Exposure offer an early 90’s alternative rock punch fronted by sassy and powerful vocals. They take pride in their performance – its rock, it’s loud and it’s fierce.

The Sydney band has been playing gigs in the city, non-stop since it’s inception in 2015, in that short life span supporting the likes of Hands like Houses, L-Fresh the Lion, Columbus, Camp Cope and Philadelphia’s Cayetana. The band met while studying their music degrees at university, travelling up to two hours each way just to rehearse and write together. With finishing their courses, they decided to take their original material and continue as The Last Exposure.

Chelsea Barnes, singer, says, “It’s a song about getting to the bottom, feeling that low and really hating yourself for it! I wanted the song to be uplifting. I wanted it to say ‘Well hey, you may feel low but you’re not alone and you’re beautiful’.”

The Last Exposure have worked with Tara O’Connell and Sharon Shen of The Queer Film Collective, the film team they worked with for their Echo music video; on another music video to go along with this single.

The name ‘The Last Exposure’, is said to be a banner for confidence and self-respect, an expression to love all and love equally. They say, it’s about giving all you got and loving yourself for it.

The Last Exposure hope’s to do so, stealing hearts and changing lives with their loud music, honest words, dorky personalities, live performance and huge sound.