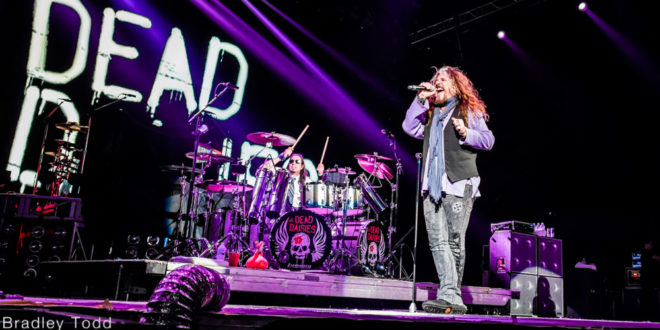 The Dead Daisies to Embark on USO Tour to South Korea

The Dead Daisies announced their first-ever USO tour, which will take the band to South Korea. The group will visit Camp Casey, K-16 Air Base and Osan Air Base at the end of October.

“After connecting with so many great servicemen & women on the ʻFreedom To Rockʼ tour with KISS in the US, we are thrilled about this opportunity to play for some of the people that defend our freedom all over the world. If youʼre a service member, catch us at a base in South Korea in October. If youʼre a fan, join us in supporting our military by visiting www.USO.org/FORCE to learn how to become a Force Behind the Forces.”

Bass player Marco Mendoza, whose father served in the Air Force, said: “Itʼs a great time to pay respect and give a little back.“ Singer John Corabi, son of an US Army serviceman, adds: “We will bring a little of America to you guys! We canʼt wait to get over there and play, itʼs going to be a blast!“

Video of The Dead Daisies announcing the USO Tour: https://youtu.be/AxOcvbgYXd8