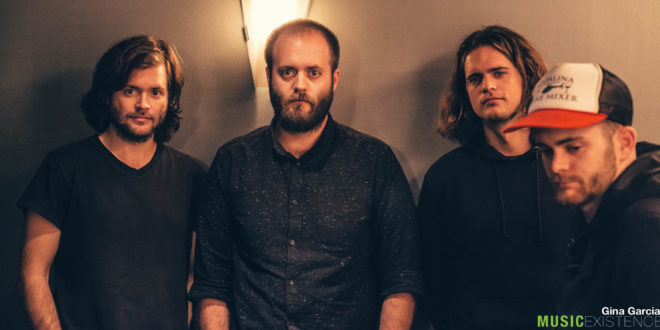 Music Existence: Do you guys write collaboratively on this album?

Dylan: No, just for one song and barely. It’s hard to. Johnny wrote the song and the chorus was lacking everyone thought and we tried to make something work lyrically and musically and it just wasn’t working. Then Jesse wrote a song and his chorus fit well in the other song’s chorus so we put it together. That was the first fusion. On the first album, Jesse and I wrote a song together but this was the first in a long time that was a fusion of two.

Music Existence: How does the songwriting process happen?

Dylan: We pretty much write our own songs, demo them, lyrically and musically produced then we bring them to the band together. Then we fine-tune them and start producing together.

Music Existence: how did you arrive to your current sound? It is very different from your previous album.

Johnny: This record has been a long time coming for us because we had released lunatic a long time ago and nothing was happening with it until things started picking up with “Come with me now”. So before that we had already been working on this. It was already slightly starting to move in a different direction. I think with a little more electronic influences may be a little bit more with pop sensibilities in terms of production and arrangement of the songs. Then we had a long time on the road touring with come with me now that we learned a lot of things in terms of how things click with people live it shifted our sound a little bit.

Daniel: I think people first latch to sound meaning production and so I understand why it sounds different than before. This record definitely has more synth and slightly different drum production.

Music Existence: The past two years have been tour heavy, is there a highlight that sticks out or a learning experience that you have carried with you to this day from those tours?

Jesse: In terms of highlights there’s many, we spent two years solidly touring and learning. One that sticks out for me is the Kings of Leon tour. We were supporting them and it was the first big tour that we have been on and to see the arena production and seeing it being built every night. Observing what a big band does with the production and everything, is really inspirational it’s one thing to see it once but to see it ten to fifteen times it forms your eye to see in a different perspective. That was really good for us in terms of working towards ourselves on a headline tour. We want to do a same scope of production so that was a great experience.

Johnny: It changes once you’re on the road miss being in the studio once you’re in the studio I miss being on the road. Actually really enjoyed touring. As long as it’s bus touring where you will have a rhythm every day if it’s over plane and you’re playing random gigs here and there he gets kind of annoying maybe but for me at least it really just changes.

Music Existence: you guys are based out of Phoenix Arizona. Geographically how does your environment in the atmosphere of being in Arizona influence your creativity?

Dylan: Without trying to sound cheesy, I think being in the desert and being isolated from the majority of the country you’re able to just, with the amount of preserves and nature, be so close to isolation in quietness and nature. When we got to Phoenix, there wasn’t quite much of a big music scene like there is in Seattle, Los Angeles, and Portland so it’s easier to focus on your own sound and your own creativity and do with what we want to do without following some trend.

Music Existence: What is your favorite lyric on the new record, Egomaniac?

Dylan: There is one line I like from “Birds Do It”, one of Johnny’s songs, that goes “birds do it, bees do it, got a feeling even priests do it”

Daniel: like “the whole” in “Repeat after me”, I think it’s just a strange and interesting lyric.

Jesse: This line from “two in the morning” that goes, “hoping some substance could prevent this
But you miss her anyway”

Music Existence: Social media is really huge right now and it is a big influence on people. How does social media take part or impact what you guys do?

Dylan: I feel like for us we don’t have a huge following on social media compared to the amount of people that listen to our music and go to our shows. Yes it works more as updating our current fans of our journey. There’s no doubt that it helps grow the fanbase.

Dylan: I think social media is a great thing especially when it’s providing a service and a good deed to people. The worst part is when it’s just a self-indulgent action.

Music existence: Wrap up the interview, in the upcoming tour dates and plans this year?

Johnny: So after a couple dates in the US, we’re heading over to Europe for three weeks and then countries that we never been to before which were really excited about; Russia, Ukraine and more. Probably take a month or two off in December with things winding down a bit. Then next year the plan is to tour, tour, tour. A lot of world touring like south Africa and hopefully get out further east like Australia and Southeast Asia

Music Existence: Countries that your most looking forward to going to?

Johnny: I most excited to go back to South America like Columbia.

Dylan: One of our biggest fan bases is in Columbia actually which is really cool, they’re super loud and supportive. Pretty excited for Russia because I’ve never been to Russia and it’s just a crazy thought to even think that we’re going to be able to go over there and play songs for them especially because for a lot of Westerners it’s a very known land.

photo based human in nyc and phoenix. sneaking in my camera everywhere I go.
@https://twitter.com/ginabgarcia
Previous The Dead Daisies to Embark on USO Tour to South Korea
Next City of the Weak Release Music Video for Craig Owens Produced Track “Censor This”