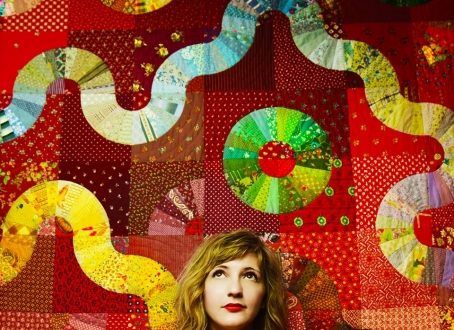 Goldfeather’s album Patchwork Quilt is exactly what the title of the album states. In many senses it is a series of random songs that somehow come together to form a musical patchwork quilt, and while it doesn’t always work on every level, there are some gems that are begging to be listened to.

“Jars on the Shelf” is a tune that sits in the middle of the album, and it’s a fitting place for it seeing as how it’s not the best or the worst on the LP, but can coast along on its own. It has a twangy guitar instrumentation throughout that really helps set the mood for the song which has dark and musty undertones. Sarah Goldfeather gives a rich and full vocal performance here that matches the background music note for note. There is also a nice mixture of an ethereal vocals that work with the tune hand in hand and the combined harmonizations that pop up later in the song really help round out the track into something great. Using string instruments bring out the unique vibe of the tune which is mostly about setting the mood of the song for listeners. The more one hears the song the better it gets so put this track on repeat and let Goldfeather wrap you up in an engaging story.

Later on the record produces one of the most theatric and sultry songs in “All Mine.” Goldfeather’s voice shines against a bare bones instrumentation that combines jazz and blues into a torch song that sounds like it could be the leading single off of a James Bond movie soundtrack. The scratchy strings that start out subtle then turn manic especially in the instrumental solo really showcases the talent of Goldfeather and how she is willing to make something unconventional, something that is not to be missed. It’s crazy and steadied at the same time feeling calculated and improvised and it is this contrast that helps make the song a standout on the album. Again Goldfeather lends her theatricality to the tune which intensifies every emotion she puts forth on the tune and it’s something to be treasured.

The absolute highlight of the LP is the first track “Spilled Milk” which has a Chapin Sisters vibe. It has an earthy, primal feel that carries itself throughout the entire song. Folky and fresh Goldfeather delivers something an audience won’t forget anytime soon. Her angelic voice cuts through the manic instrumentation and brings a breath of vitality to the tune in a way that only Goldfeather can accomplish with such ease. “Why can’t I let you go/my love for you is buried in the snow,” she repeats over and over again against a backdrop of background vocals that will captivate listeners, the layering bringing an already fantastic tune into another plane of greatness.

Of course as with most albums there are some missteps. “Cave Museum” feels oddly disjointed, and the title track also feels as if there is something amiss, the minimal approach not working for the tune, but as a whole the LP is definitely worth the listen and discovery and this reviewer looks forward to whatever Goldfeather puts out next.

Jeremy Parsons is a singer/songwriter born in San Antonio, Texas. As a child he experienced …